Expected to be more driver oriented than the 3-series sedan.

BMW has done a big expansion to its line-up. It starts from the addition of new model lines (2-series, 4-series, X4 etc.) and goes till special models like the one we are talking about here.  Also Read - RIP! BMW India CEO Rudratej Singh Passes Away At 46 Due To Cardiac Arrest 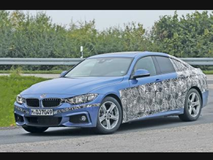 Much like the other Gran Coupe which is based on the 6-series, the 4-series Gran Coupe is sportier, is bound to look sharper and will obviously appeal to those who want something more aggressive looking than the F30 3-series.  Also Read - Salman Khan Gifts Rs 1.5cr BMW M5 to Dabangg 3 co-star Kichcha Sudeep, Here’s How Actor Reacted

According to AutoExpress, the German carmaker is close to putting the car into production. The unveiling is expected to take place next year.