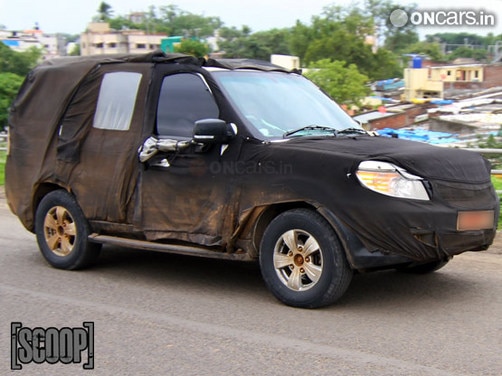 Just a few days back we had posted a photo of the Tata Safari Merlin without any camoflage, now we caught the Merlin testing again on the outskirts of Pune. Although still in camouflage, all that can be deduced is the fact that the new Merlin will be sporting projector headlamps. As said earlier, the launch of the car has been getting delayed due to the developments on the SUV made with the assistance of JLR. Also Read - Indian Billionaire Ratan Tata’s Elegant Sea-facing White House Will Make You Believe in Simple Living

Foldable footrest for the tailgate

Chrome strip with ‘Tata’ embossed on the boot door

Over the current Safari, the Merlin’s spare wheel is being tucked away under the boot floor following the current SUV trend. This should help Tata reduce the rattling noises experienced by most Safari users. Better leather and plastics will be used to garnish the interiors. Safety features like ABS, EBD and traction control will be borrowed from the Aria.

Expected to be a good handler, the Merlin will feature 158mm disc brakes all around. The wheelbase is also expected to increase thus hinting towards more rear legroom. The Merlin is expected to launch in the festive season this year.