Toyota Motors, the Japanese automaker today launched the 2015 Camry Hybrid facelift in India priced of INR 31.92 lakh (ex-showroom Delhi). The face lifted Hybrid sedan comes with a hoard lot of cosmetic updates, given to both interior and exterior styling. Although on mechanical front the car remains unchanged. Toyota also says customers can expect an INR 70,000 rebate as incentive on the New Camry Hybrid. The company has also launched the petrol variant of 2015 Camry sedan priced at INR 28.80 lakh (ex-showroom Delhi) and in India it will go up against the likes of Volkswagen Jetta, Skoda Superb and Audi A3. 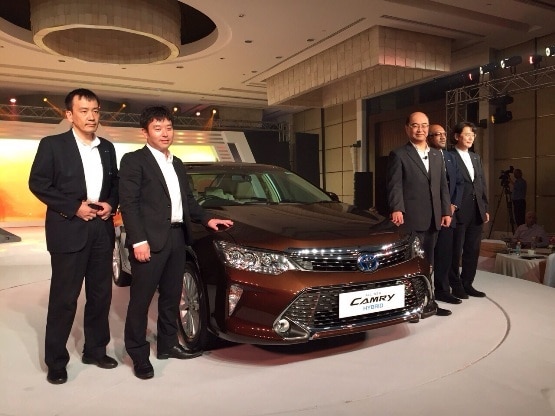 As we said earlier the 2015 Toyota Camry Hybrid remains unchanged under the hood. It still derives its power from a 2.5-litre petrol mill paired with a 650V electric motor together producing a combined peek power output of 205 PS and 270 Nm of peek torque. The Hybrid come mated to an e-CVT (Electronically-Controlled Continuously Variable) transmission driving the power to its front wheels. As for the regular variant it is powered by the same 2.5-litre petrol engine producing a peek power of 181PS and a peek torque of 233 Nm. Transmission duties are taken care of by a 6 Speed Automatic with Sequential Shift gearbox. 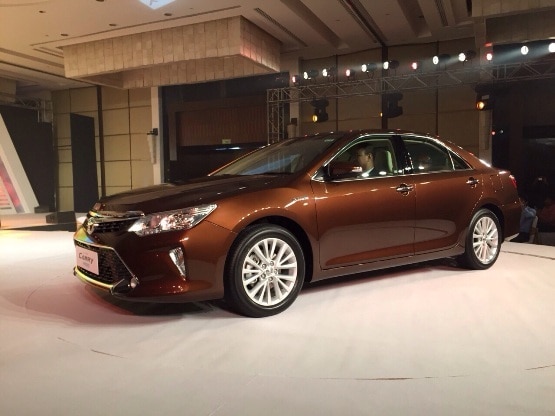 On design front the 2015 Camry Hybrid facelift looks much more stylish and aggressive compared to the previous model.  Toyota has completely redesigned the front fascia by adding a sleeker grille with Toyota logo at the centre and massive airdam with a very stylish chrome outline that also houses the new circular fog lamps. The muscular front bumper also gets some new air intakes on both sides and a whole new headlamp cluster sporting LED projector lamps with day-time running lights. 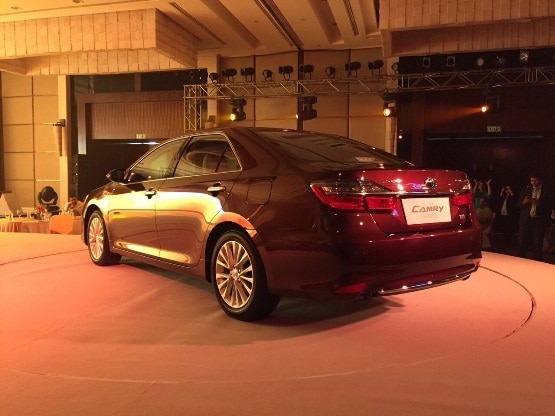 The side profile all the more remains the same but the rear end does offer some premium styling. At the back you get some new two piece tail-lamps with LED inserts and a redesign boot lid. The new sleeker chrome looks much sophisticated and now partitions the tail-lamps. Even the rear bumper has been redesigned and now comes with reflectors on either sides along with a dual exhaust system. Additionally the car will also come with a new set of 17-inch alloy wheels.