Toyota to build a WRC-ready GT86

The car, to be made for private competitors, is expected to launch in 2015.

While most of us know Toyota as the carmaker that makes reliable but slightly boring cars, we often forget about the huge potential this brand and its engineers have. Back in the day, the Japanese carmaker ruled our hearts with cars like the AE86, Supra, Celica, Chaser, Crown, MR2, 2000GT…you name it!Also Read - Toyota Sees Marginal Growth In October 2021 Sales. Details Inside 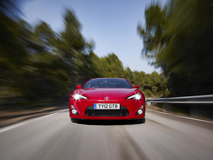 All that's not gone though. So, while we Indians get things like the Innova and Etios, Toyota's motorsport division (TMG) has been churning out impressive products. First was the 'ring record setting electric single seater formula car and now it's the TMG GT86 CS-R3! The name might not be as interesting but the car is, well at least the idea is! The new car is under development and it should be ready by 2015. But what is it? It is a WRC-ready version of the GT86 sportscar, powered by a 2L boxer engine mated to a six-speed sequential gearbox sending the power to the rear wheels. Also Read - Toyota September 2021 Sales Review: Fortuner, Innova Crysta Bring Cheer; Glanza Dampens Mood

This extreme form of Hachi Roku is expected to be made available to private competitors before the 2015 season starts, so that they can enter the championship with this car. Well, looks like Toyota is bringing the glory days back and the statement by TMG's Nico Ehlert confirms the fact, “Ralying is in our blood at TMG so it is very exciting to announce that we will be expanding our rally operations. The GT86 CS-R3 promises to be a thrilling car on the rally stages; with real wheel drive we can expect some dramatic action which is sure to be entertaining for drivers and fans alike.”