Japanese car manufacturer, Toyota has commenced the testing phase of upcoming Toyota Yaris Ativ in India as spy shots have emerged on the internet. Toyota Yaris Ativ (Toyota Vios) was introduced in August last year, however, Indian market is yet expected to hit the Indian market. Moreover, it is also sold as Vios in some markets and our market will get the car with Vios badging.  Expected to make Indian debut at Auto Expo 2018 next month,  the car will rival the segment leader Honda City, Maruti Ciaz, and Hyundai Verna. See More: Top 5 Upcoming Cars Launching in 2018: New Maruti Swift 2018, Ertiga 2018, Vitara Brezza Petrol, Nexon AMT 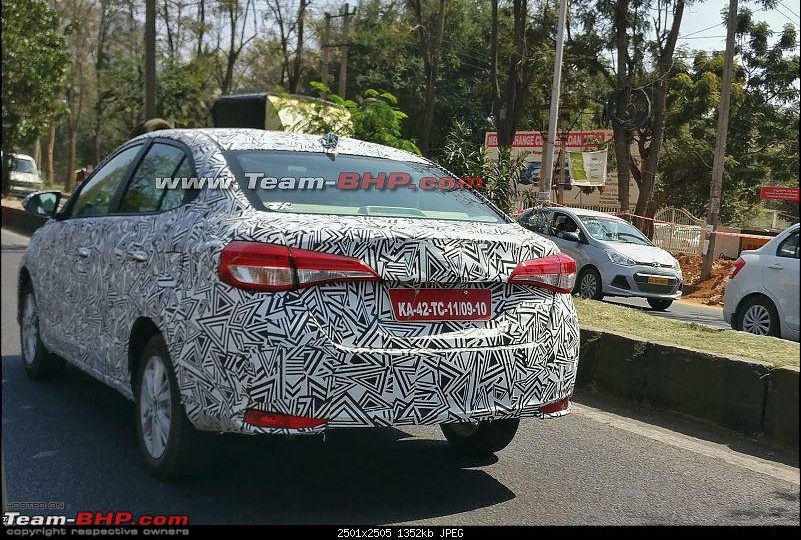 Going by the spy shots, the Toyota Yaris Ativ will get projector headlamps with LED light guides, LED DRLs, 16-inch alloy wheels, LED tail lamps, shark fin antenna and much more. Dimensionally, the new Toyota Yaris will get overall length of 4425mm, width of 1730mm and height of 1475mm along with wheelbase and ground clearance of 2550mm and 133mm respectively.

At the heart, the sedan is expected to get 1.5-litre Dual VVT-i petrol unit that can produce maximum power of 105 bhp with peak torque of 140 Nm. Moreover, the Yaris Ativ could also be offered in diesel avatar. In the Thailand market, the sedan is offered with a 1.2-litre Dual VVT-i petrol engine that makes 86 PS/108 Nm of power figures. However, the powerhouse options on the car could vary which will be revealed once it makes debut next month at auto show. Also Read: Suzuki and Toyota Join Hands; To Make Electric Vehicles in Gujarat by 2020

Once launched the car will take on the players such as Maruti Ciaz, Honda City and Hyundai Verna for the Indian market. Likely to be priced in the  range of INR 8 – 13 lakh (ex-showroom), the new Toyota Yaris Ativ is speculated to hit the domestic market by the second half of this year.