Volkswagen rolls out 1,00,000th vehicle from the Chakan plant

2 years taken to achieve the feat 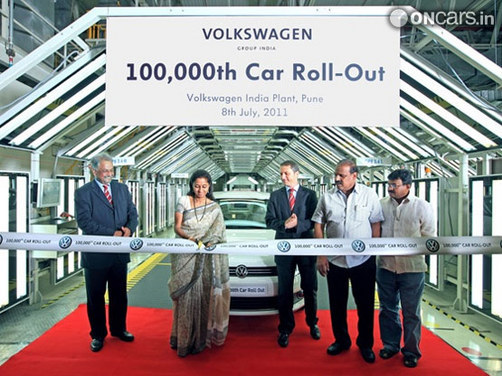 Volkswagen reached a major milestone this year with rolling out the 1,00,000th vehicle from the Chakan plant near Pune. Set up in 2009, Volkswagen has been manufacturing the Polo, Vento and the Fabia at this plant. This comes in as a bigger achievement that Volkswagen had rolled out their 50,000th car just five months ago. 1,00,000th vehicle to be rolled out was a Vento. Also Read - Wimbledon to Receive $226 million in Compensation For Calling off This Year's Championships

Also Read - It's For Government to Decide, Not Shoaib Akhtar: Madan Lal on Ind-Pak Series

The Chakan plant has a total capacity of 1,30,000 cars and manufactures cars for Volkswagen and Skoda. The plant was set up in 2009 by Volkswagen by investing Rs 3,800 crores which is the has been the largest investment by a German company in India.

The event was graced by Supriya Sule, Honorable Member of the Parliament, Volkswagen Group Chief Representative India and President & Managing Director, Volkswagen India Private Limited Dr. Chacko, major suppliers, members of the Board of Directors and other employees.