Volkswagen, the German carmaker, is working on a range of Sports utility vehicles to improve its sales globally. At the 2014 Delhi Motor Show, the company showcased its upcoming five-seater crossover utility vehicle- the Taigun, which is speculated to be launched in India in 2017. This CUV will also go on sale in select international markets including Brazil. The production spec model is reportedly to be unveiled by the end of this year. Ahead of its official premiere, the small UV has been digitally rendered. 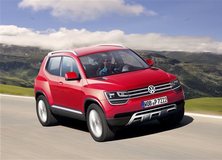 First displayed to public at the 2012 Sao Paulo Motor Show, the Taigun shares styling with the Volkswagen Up! and the Golf. Going by the rendering, the SUV has short overhangs at the front and rear. Up front of the SUV is a dual-slat chrome grille flanked by sharp headlamps with integrated LED daytime running lamps and silver skid-plate. Adding to it, the car has plastic cladding all around the body, front and rear skid guards and roof rails that offers rugged look to it. Also Read - Top 5 Compact SUV of 2016 on sale in India

At the Delhi unveiling, Volkswagen revealed that the Taigun will be powered by a 1.0-litre turbocharged three-cylinder engine that churns out 110bhp of power. The small SUV is claimed to achieve 0-100kmph mark in 9.2 seconds before hitting a top speed of 185kmph. Both manual and automatic version will be on offer. Interestingly, the small SUV will be made available in both two-wheel-drive and four-wheel-drive variants. The Taigun is expected to be priced about Rs. 7 lakh to Rs. 12 lakh. Globally, it will rival against the likes of Ford EcoSport and Renault Captur.