Delhi University Admission 2021: Admission against the third cut-off list will be conducted from October 18 to October 21.

DU Cut-Off 2021 Highlights: The Delhi University released its 3rd cut-off list today, October 16. Admission to most course for open category students have closed in almost all the colleges. The consolidated cut-off lists for Arts and Commerce, Science and BA programmes have been released for all the colleges at du.ac.in. Admission against the third cut-off list will be conducted from October 18 to October 21. The 2nd cut-off list witnessed a marginal decline between 0.25 and 1.25 percentage points in various courses and in the third list, cut-offs may drop even further. The university has received a total of 1,18,878 applications under the first two cut-off lists. A total of 51,974 students had paid the fees till 5 pm on Friday, after which the payment gateway was closed.Also Read - Delhi University: Special Drive Cut-Off List For UG Admissions Open to Kashmiri Migrants

Hindu College cut-off has dropped by a marginal percentage point from 99.25 per cent to 99 per cent for the BA (Hons) Economics. For BCom (Hons), the 3rd cut off is 98.75 per cent (99 per cent in the second cut off). For courses including English and Hindi, admission against the 3rd cut-off list have closed.

Ramjas College cut-off has dropped marginally around 0.50 per cent to 1 percentage points in the third cut-off list. Statistics, Chemistry and Mathematics cut-offs closed at 98.25 per cent, 96.66 per cent, and 98 per cent.

At Hindu College, admission against 3rd cut-off is closed for all the undergraduate Science programmes.

The University of Delhi has released the third cut-off list for its undergraduate admission. The consolidated list for all three streams has been released in PDF format.

NTA will announce results of the Delhi University Entrance Test (DUET) 2021 soon. While DU admits students to UG courses on the basis of Class 12 marks, DUET is conducted for admission to postgraduate and some undergraduate courses at the university.

15:25 PM: Motilal Nehru College is expected to release its cut off list soon at mlncdu.ac.in. 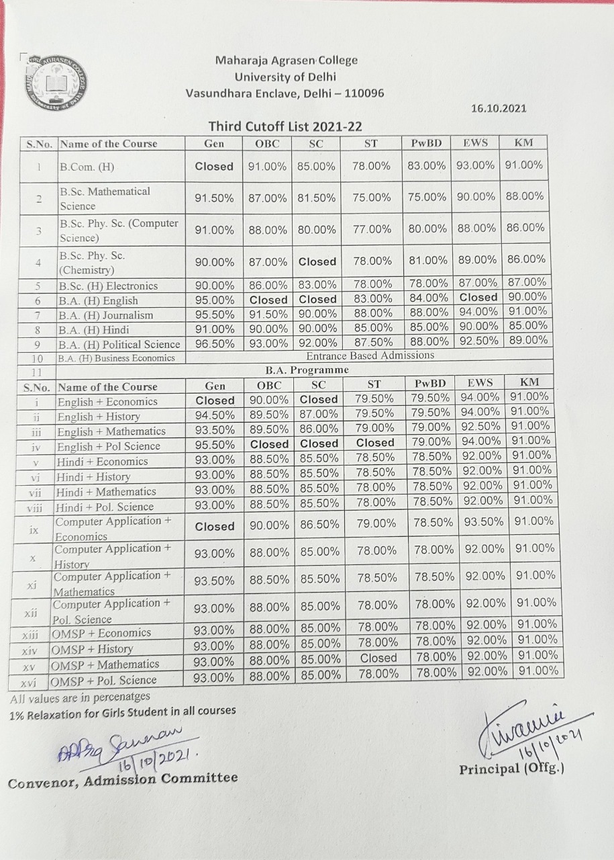 14:00 PM:  The admission process will begin once the cut-off is declared by all DU colleges. Here’s a list of documents needed for the admissions process.

10:54 AM: Total seat break-up offered by the Delhi University.

10:04 AM: Dr Jaswinder Singh, principal of Sri Guru Tegh Bahadur Khalsa College said that the cut-offs are likely to see a one per cent decline in the third list.

09:56 AM: Deen Dayal Upadhyaya College principal Hem Chand Jain said that the decline in the third list will range from 0.25 to 0.5% with only a few courses likely to remain open.