MPPEB Vyapam Patwari Result 2017 Declared on peb.mp.gov.in But Stalled For Four Hours, Can be Accessed by 4:30 PM

The results for the MPPEB of Patwari recruitment 2017 examination has been finally declared on its official website.

Madhya Pradesh, March 27: The Madhya Pradesh Professional Examination Board (MPPEB) has declared the results of Patwari recruitment 2017 examination. The MPPEB Vyapam Patwari Results 2017 have been declared on the official website of the board. However, the students cannot access the results as they have been put on hold. Students who had appeared for the MPPEB Vyapam Patwari exam 2017 can check their results after 4:30 PM. Also Read - BREAKING: Bhopal Under Corona Curfew Until April 19. Check What's Allowed, What's Not

The notification of the result at the official website says that the MPPEB Vyapam Patwari Results 2017 has been declared but put on hold for four hours. It was signed at 12:30 PM. Going by the time, the results are likely to be declared by 4:30 PM. Once the exams are visible, the candidates are advised to check their scores by using their nine-digit roll number. Also Read - Video: 2 Cops Brutally Thrash Indore Man For Not Wearing Mask, His Son Pleads Them to Stop | Watch

Worry not, within a few hours time, you would be able to access it, as the notice says. Also Read - Bhopal Declares 20 Areas, Houses as Containment Zones; Sunday Lockdown in These 12 Cities of MP 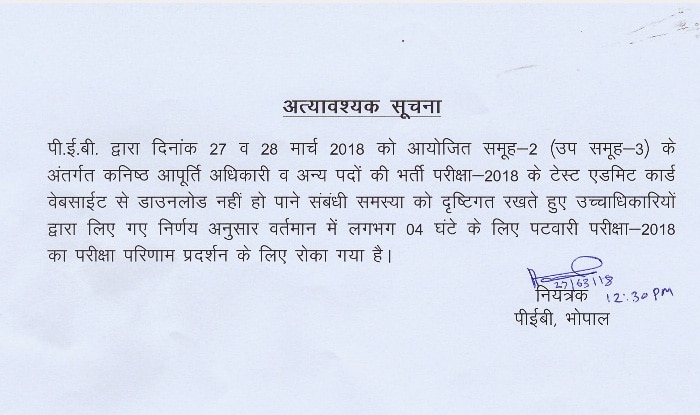 Here is the direct link to check the MP PEB Vyapam Patwari 2017 results  after 4 hours: http://peb.mp.gov.in/results/RESULT_17/PATWARI_RES17/Patwari_2017_Result_notice.jpg

Professional Examination Board (PEB) is an autonomous body under the Madhya Pradesh government. It was initially set-up as Pre Medical Test Board by the MP government in the year 1970. In 1981, the Pre Engineering Board came in place. However, both these Boards were merged and named as PEB in 1982. Later, the Board was given the responsibility of carrying entrance tests for admission of various colleges in the state.