It may be election time but Azamgarh and its past has been known to the world. Why this drama? There’s no denying fact that, Azamgarh has been the base of terrorists links. 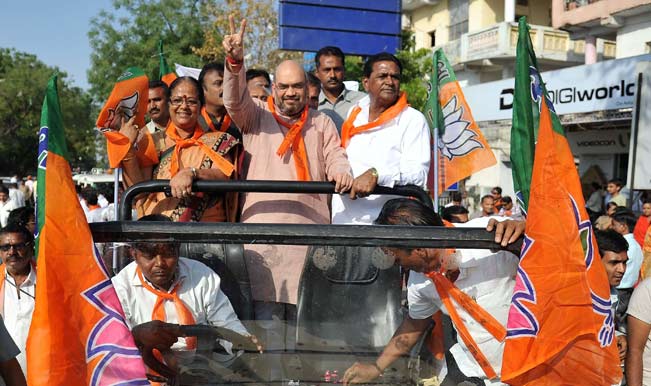 BJP Uttar Pradesh in-charge and Narendra Modi’s close aide, Amit Shah sparked a controversy in his Azamgarh rally when he said, “They (Samajwadi Party) have turned Azamgarh, land of brave, into a base of terrorists as there is no fear of the government which is advocating their release.” Also Read - 19 Lakh Jobs, Free Coronavirus Vaccine: BJP Releases Manifesto For Bihar Assembly Election 2020

Shah’s statement invited the sharpest of criticism from SP, BSP and Congress with some questioning his presence in the state, some ministers advising the Election Commission to ban him from UP, some blaming him for dividing the people and disturbing the peace. But what Shah has said is known something to the world for so many years. Also Read - Former Maharashtra Minister Eknath Khadse Quits BJP, to Join NCP on Friday

Shah also said, “The accused in the Gujarat bomb blasts were from Azamgarh. Being the then Home Minister there (Gujarat), I got the accused arrested. Since then there is not a single terror attack has taken place in Gujarat.” This statement comes two days before the phase eight polling.

The north eastern town in Uttar Pradesh till sometime ago was considered a communist bastion from where SP supremo Mulayam Singh is contesting elections this time. It’s been a known fact that Azamgarh has been a terror hub in Uttar Pradesh. It has a long history of innumerable gang wars, murders, extortions and supari-killings etc. Azamgarh is well known as the ‘Dubai of UP’ not for the riches but for the emphatic rise in unlawful and terror activities.

Gangster Abu Salem, for instance, hails from Azamgarh. There’s nothing new to mention about the underworld don who years ago was himself recruited by Dawood Ibrahim gang from Sarai Meer village in Azamgarh. Once he established his name in the underworld community he just shot up the ranks. He used to hire boys who had no criminal records from Azamgarh to meet his needs (assassinating the targets). The young boys would return on the first train back home, once theie target was killed.

Bollywood too has been at the receiving end from the Azamgarh hitmen. Producer-director Rajiv Rai of Trimurti Films was under attack after he refused extortion money. The alert security staff foiled the attack. The killers were from Azamgarh.

Noted producer and director Subhash Ghai too had a narrow escape. Music king and T-Series owner Gulshan Kumar was not that lucky and was killed by hired killer in Andheri. Rakesh Roshan too was attacked after his blockbuster Kaho Na Pyar Hai. In all these incidents the hired hitmen were hand-picked from Azamgarh.

Arms dealer Abdul Qayyum Shaikh, is another gangster of the underworld and one-time aide of Dawood Ibrahim, also hails from Azamgarh. He was arrested few years back in Mumbai. A police statement in 2009 stated that most of the Indian Mujahideen men hail from Azamgarh.

So is Amit Shah stating something that we dont know? Why are the politicians shying from facts which have no contribution from Amit Shah? It may be election time but Azamgarh and its past has been known to the world. Why this drama? There’s no denying fact that, Azamgarh has been the base of terrorists links.