As the rally was held in the electronics city, Modi said the IT city had potential to surpass South Korea in technology and product innovation. 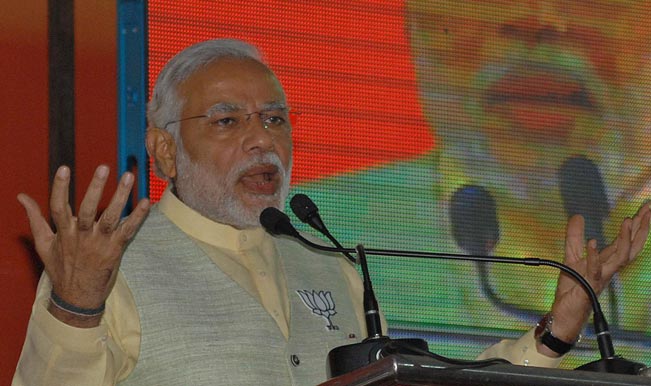 Bangalore, April 8: India should have a strong government so that no country can dare challenge it or look down upon it, BJP’s prime ministerial candidate Narendra Modi said here late Tuesday. “We need a strong government in New Delhi. A government other countries will look up to with awe and respect. No nation dare look us in the eye. We should deal with other countries on equal terms from a position of strength and not weakness,” Modi said, addressing a huge election rally on the city’s outskirts. Also Read - 'I am a Full-time, Hands on President': What Sonia Gandhi Told G-23 Leaders at Key CWC Meet

Expressing confidence that the BJP-led National Democratic Alliance (NDA) would return to power after May 16, Modi said the future of the country was in the hands of the people. “You decide what kind of a government you want after May 16. You have seen what happened during the past decade, which turned out to be a lost decade, as the Congress-led UPA government had ruined the country,” Modi asserted. Also Read - Manmohan Singh Health Update: Former Prime Minister's Condition Stable, Says AIIMS Official

As the rally was held in the electronics city, Modi said the IT city had potential to surpass South Korea in technology and product innovation. In a veiled attack on Congress’ Bangalore South candidate Nandan Nilekani, without taking his name, Modi said the Congress has fielded one of the richest candidates who “squandered crores of rupees in giving a unique identity (Aadhaar) to millions of people, which even the Supreme Court questioned, as it did not address the security concerns.”

Appealing to the electorate to vote for the BJP in the April 17 election, Modi said the people should give him an opportunity to serve the country for the next 60 months after they have been ruled by the Congress over the last 65 years. On a day-long whirlwind tour of the state, Modi also addressed rallies at Bagalkot and Koppal in the northern region of the state and in Mysore.