Long queues could be seen at a number of polling stations across Haryana and Chandigarh. 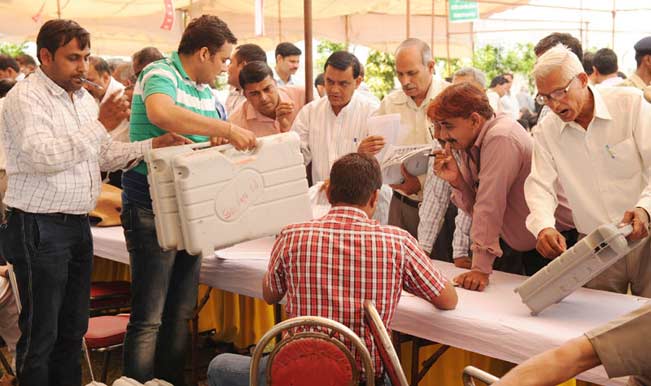 Chandigarh, April 10: About 60 percent of Haryana‘s nearly 1.60 crore electorate exercised their franchise till 4 p.m. Thursday for the 10 Lok Sabha seats from the state, officials here said. In Chandigarh, too, nearly 60 percent of the 6.13 lakh eligible voters cast their ballot. Also Read - Aarya 2: Sikandar Kher Talks About How Show Is Progressive With a Female Lead, Kirron Kher Resuming Work and Much More

Long queues could be seen at a number of polling stations across Haryana and Chandigarh. In Haryana, Kurukshetra (65 percent), Sirsa (64 percent) and Hisar (63 percent) recorded the highest polling till 4 p.m. Also Read - Sherni is Back! Cancer Warrior Kirron Kher Shares Hilarious Conversation With Shilpa Shetty And Badshah

It was 55 percent in Gurgaon from where Aam Aadmi Party (AAP) leader Yogendra Yadav is contesting, while Bhiwani-Mahendergarh recorded a relatively lower turnout of 53 percent.

Nearly 1.60 crore people, including over 73.8 lakh women, are eligible to vote in Haryana to decide the fate of 230 candidates, including 10 women candidates, who are contesting in the state’s 10 Lok Sabha constituencies.

In Chandigarh, enthusiastic voters began queuing up in the first hour after the commencement of polling at 7 a.m. A total of 17 candidates are in the fray for the lone Lok Sabha seat from Chandigarh.

The big fight in Chandigarh is between former railway minister and Congress leader Pawan Kumar Bansal, who is the sitting MP from the city beautiful, and three women challengers – Kirron Kher of the BJP, Gulkirat Kaur Panag (Gul Panag) of the Aam Aadmi Party (AAP), and Jannat Jahan-ul-Haq of the Bahujan Samaj Party.

Kirron Kher and Gul Panag are celebrity candidates from Mumbai’s film industry. Both have lived in Chandigarh earlier.

Chandigarh has over 2.81 lakh women voters while there are over 1.71 lakh young voters in the 20-29 age group.

While Bansal cast his vote in Sector 28, actress Kirron Kher, who has her vote in Mumbai, accompanied her 101-year-old father and other family members to a polling station in Sector 8.