Narendra Modi to be elected as NDA coalition leader

The 63-year-old Prime Minister-to-be will meet President Pranab Mukherjee in the company of NDA leaders after his election as leader of the grouping. 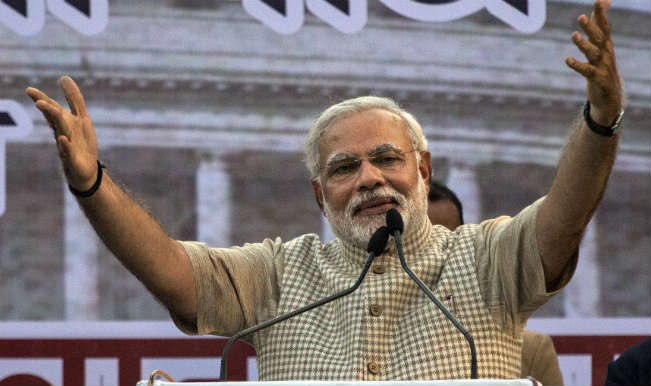 New Delhi, May 20: Narendra Modi is all set to be elected leader of the BJP and NDA parliamentary coalition today as jockeying for positions in the new Cabinet gained momentum. Also Read - PM Modi Launches 7 New State-Run Defence Companies, Says They Will Become a Global Brand

The 63-year-old Prime Minister-to-be will meet President Pranab Mukherjee in the company of NDA leaders after his election as leader of the grouping which will enable the President to appoint him to the post. Modi is likely to be sworn in by the weekend. Also Read - Gandhi-Savarkar Row: Don't Think Mahatma Gandhi is Father of Nation, Says Veer Savarkar's Grandson | WATCH

There is speculation that former minister Arun Shourie could be in the race for Finance Ministry while Jaitley may get External Affairs.

Besides, some leaders belonging to allies like Shiv Sena, TDP, Akali Dal and LJP may also be included.

Modi will first be elected BJP Parliamentary Party leader at a meeting in the central hall of Parliament around noon and shortly later by the NDA MPs. After this, he will meet the President along with a delegation of coalition leaders, who will convey to him their decision to choose Modi as their leader.

For the third successive day on Monday, a series of meetings took place in the BJP, RSS and at Gujarat Bhavan, where Modi is putting on.

For the first time since the results were declared, Swaraj called on Modi in Gujarat Bhawan, the nerve-centre of activities these days. Close aides Jaitley and Amit Shah, besides Kalyan Singh met the Prime Minister to-be separately.

Vaiko, an ally of BJP in Tamil Nadu, who lost the election, also met Modi, while YSR Congress chief Jaganmohan Reddy also called on him and extended “issue based” support to his government.

Sources claim that Modi kept to himself the strategy over his Cabinet formation.

After his election, Modi will go to Ahmedabad in the evening. On May 21, he will resign as Chief Minister and a new leader of the Gujarat BJP Legislature Party will be elected to succeed him in the state.

Sources say that Modi’s close confidante and Revenue Minister Anandiben Patel is the frontrunner for the Chief Minister’s post.

As party leaders continued parleys among themselves and with RSS leaders, indications emerged that the leadership would like Jaitley to be part of the government, notwithstanding his defeat.

While the role of party patriarch L K Advani in the new government is not clear, sources say party veteran Murli Manohar Joshi is said to have conveyed to Modi that he has no problems in working under him in his Cabinet.

The RSS office in Jhandewala was also abuzz with activity as a number of newly-elected BJP MPs met senior RSS leaders.