The 89-year-old patriarch's response came amid strong indication that his party was headed towards an unprecedented rout in its Lok Sabha poll performance. 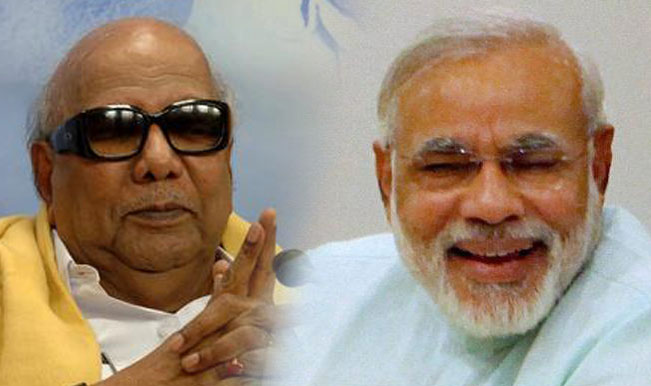 Chennai, May 16 : Putting up a brave face in the wake of total annihilation of his party, DMK chief M Karunanidhi today vowed to continue to work to win people’s confidence as he greeted BJP and its Prime Ministerial candidate Narendra Modi on its “big win”.
“I extend my greetings and that of DMK to BJP and Narendra Modi, who is going to take over as the Prime Minister, for the big win across India,” he said in a statement.
The 89-year-old patriarch’s response came amid strong indication that his party was headed towards an unprecedented rout in its Lok Sabha poll performance.
He said he would take the loss in his stride, in line with party founder CN Annadurai’s principles of “not going berserk during win or getting bogged down due to loss.”
“DMK accepts people’s verdict with a bowed head. We have faced similar losses and bigger triumphs than other parties,” he said, adding the party will strive to work towards winning the confidence of people.
With AIADMK set for a clean sweep, surging ahead in 35 seats of 39 seats, DMK today witnessed its worst Parliamentary poll performance although it faced a near rout in the 1991 Assembly elections when AIADMK chief Jayalalithaa nearly won all the seats against the backdrop of the assassination of late Prime Minister Rajiv Gandhi.