The BJP, which has consistently supported the Telangana demand, hopes to put up a good show in alliance with the TDP, which is a major force in Andhra Pradesh. 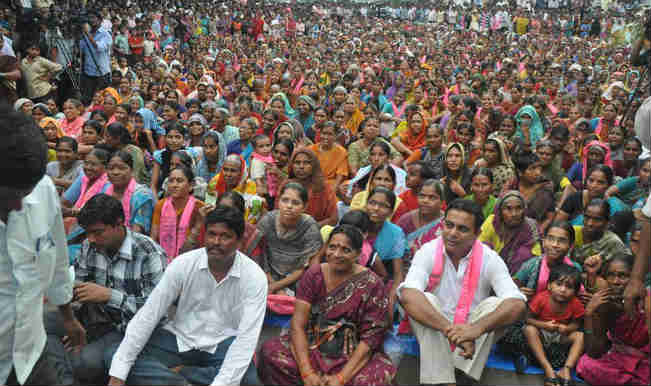 Hyderabad, April 7: Telangana is all set to witness three-cornered contests for Lok Sabha and legislative assembly polls after the Telugu Desam Party (TDP) and BJP alliance, and the Telangana Rashtra Samiti (TRS) as well as Congress going their own way. Having ruled out merger or even an electoral alliance with the Congress, TRS president K Chandrasekhar Rao has already made it clear that his party would go alone in the April 30 polls. Also Read - Health Authorities in Telangana On Their Toes After 43 Girl Students Test Positive For COVID19 in Sangareddy

He has already announced candidates for 73 assembly seats (out of 119) and seven Lok Sabha constituencies (out of 17) in the Telangana region, where the last date for filing nominations is April 9. Congress, which is in the process of striking a seat-sharing deal with the Communist Party of India (CPI), has named its candidates for 16 parliamentary seats and left one seat for the CPI. Also Read - Shocking! 80% Women in THESE South Indian States Justify Men Beating Their Wives: Survey

The Congress is yet to announce its nominees for assembly segments due to pressure from ticket seekers. According to the TDP-BJP seat-sharing agreement, the BJP is set to contest eight parliamentary and 47 assembly seats in Telangana. However, supporters of ticket aspirants from both the parties, who fear losing their seats due to the alliance, continued to hold protests for the second day today.

In a major boost to the National Democratic Alliance (NDA), the TDP yesterday returned to the BJP-led alliance after a gap of a decade. The Congress is hoping to do well in Telangana for having delivered separate statehood for Telangana. The TRS is confident that the electorate would vote for its leadership in guiding the statehood stir. The BJP, which has consistently supported the Telangana demand, hopes to put up a good show in alliance with the TDP, which is a major force in Andhra Pradesh.