365 Days fame Michele Morrone has issued a statement expressing displeasure and anger after his nude pictures from the sets of the show were leaked online. The actor mentioned that it is really offensive and disrespectful.Also Read - 365 Days Actor Michele Morrone Approached By Karan Johar For A Movie? Here's What Italian Star Has To Say

Michele Morrone talked about privacy and mentioned that it is never okay to invade someone’s privacy. He also added that it was very offensive for him. “As an actor your life becomes public. But as a human being, I would still like my privacy to myself, I am a huge fan of privacy. It is never ok to invade someone’s privacy and it’s very disrespectful. I really wanna thanks all of my online family for taking action against all the private images of me that leaked while I was working on set professionally. What happened is a big offense to me. I really appreciate what you have all done guys…As always,” the statement read. Also Read - '365 Days' Star Michele Morrone Likely To Make Bollywood Debut With Karan Johar? Deets Inside 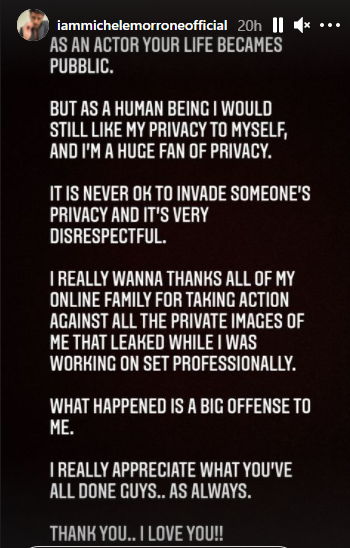 Meanwhile, earlier this year, it was reported that Michele is also likely to make his Bollywood debut with Karan Johar. ETimes had reported that Karan Kohar contacted the Italian superstar offering a Bollywood film. The report cited a source claiming that Johar had contacted Michele Morrone expressing the desire to work with him.