Critics panned the movie when it released on August 15, 1975.

As every Indian around the world would celebrate August 15, 2016 as the 70th Independence Day, the memorable day will also mark the 41st anniversary of one of the landmark movies of Indian cinema. We are talking about, Ramesh Sippy’s cult film Sholay, which completes 41 years after first releasing on August 15, 1975 at Minerva in Bombay. The multi star cast action flick including the biggest superstars Amitabh Bachchan and Dharmendra along with Sanjeev Kumar, Amjad Khan, Hema Malini and Jaya Bachchan remains one of the biggest Hindi feature film ever to screen in Bollywood. ALSO READ: More interesting facts about Sholay you did not know. Also Read - Dharmendra Introduces His Grandson Rajveer Deol, to Make Bollywood Debut With Barjatya Production

From the iconic characters like Gabbar Singh to Jai-Veeru’s tale of friendship, the subtle love story to powerful dialogues, Sholay had it all. We look at some more interesting facts about Hindi cinema classic Sholay – which you may or may not know. ALSO READ: Sholay turns 40: Karan Johar remembers dancing to Hema Malini’s song Jab Tak Hai Jaan. Also Read - Iranian Sholay? Woman Acts As Basanti & Dances to 'Jab Tak Hai Jaan', Video Will Make Your Day | Watch

1. Can you believe what the critics had to say about Sholay on its release? Everything NEGATIVE! Some of the notable critical remarks were by K.L. Amladi of India Today calling the film a “dead ember” and “a gravely flawed attempt”. Meanwhile, the popular Indian cinema magazine Filmfare called Sholay “imitation western—neither here nor there.” In fact the film critics and box office pundits declared Sholay a big flop. Over the times the words were eaten and we known how Sholay is now the biggest classic film ever made not only in India gained worldwide recognition. ALSO READ: Sholay turns 40 on Independence Day 2015; Salman Khan & Abhishek Bachchan share their memories. Also Read - Dharmendra Talks About Heartbreak And How He Feels Bad, Fans Show Concern

2. Well if reports are to be believed then Sholay’s plot was heavily inspired by Akira Kurosawa’s action flick Seven Samurai, and John Sturges’ The Magnificent Seven. 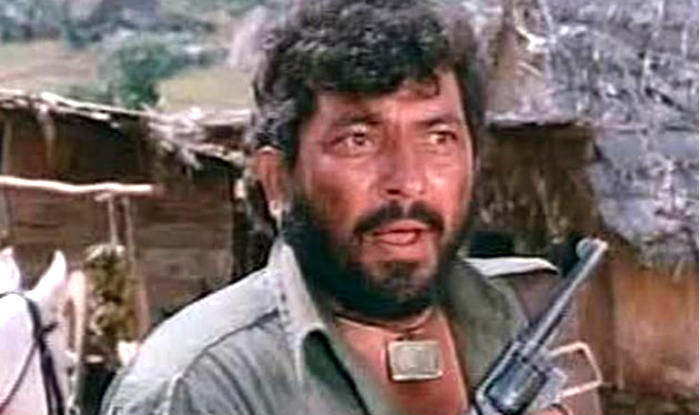 3. We all know how Amjad Khan was not the first choice to play the role of Gabbar Singh as Javed Akhtar found this newcomer’s voice too weak for portraying the role of dreadful dacoit. But not many know that once Amjad Khan was on board with the project, he prepared for the role by reading Abhishapth Chambal, a book on Chambal dacoits written by none other than Sholay co-actress Jaya Bahaduri’s journalist father Taroon Kumar Bhaduri. ALSO READ: The most iconic dialogues from Sholay.

4. As a matter of fact Sanjeev Kumar wanted to play Gabbar in Sholay so badly that he went to the extent of staining his teeth and messing up his hair to show he could look like a disgusting dacoit.

5. The iconic role of feared dacoit Gabbar Singh was originally offered to Danny Denzongpa, but he could not accept Sholay it as he was committed to act in Feroz Khan’s Dharmatma (1975), which was to be shot in Afghanistan at the same time. 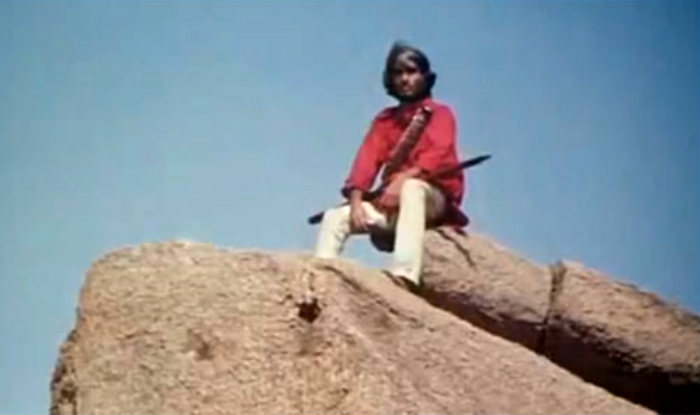 6. Such has been the craze of Sholay that Mac Mohan who played the role of Sambha mouthed a single dialogue was referred as “Sambha” all his life.

7. The original idea and screenplay of Sholay was just a four-line snippet which celebrated pair Salim Khan and Javed Akhtar, more popularly known as Salim-Javed shared with the directors.

8. The idea of making Sholay was not really the hot cake among directors or producers. Before Javed Akhtar and Salim Khan narrated their concept to G. P. Sippy and Ramesh Sippy, Sholay was rejected by team of two director and producer. Now that is how you miss being part of history! 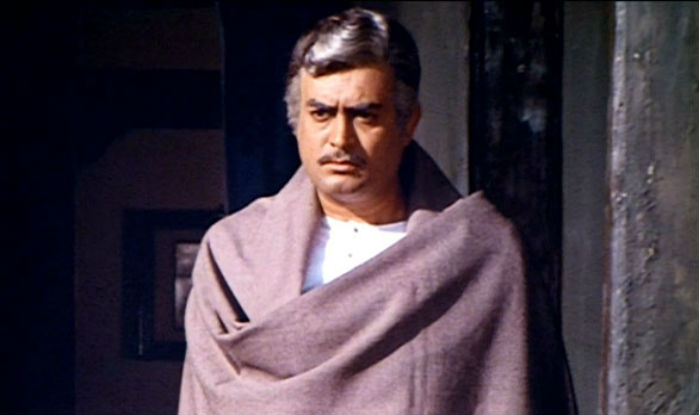 9. In the role of disciplined, honourable and revenge seeking Thakur Baldev Singh of Sholay, veteran actor Pran was considered to play the role but eventually went to actor Sanjeev Kapoor as Sippy thought him to be a better choice.

10. In fact Salim Khan had originally approached Dilip Kumar to play the role of Thakur but he turned it down saying the role was too limiting after hearing the narration of Sholay.

11. The two leading pairs – Amitabh Bachchan and Jaya Bhaduri; Dharmendra and Hema Malini were romantically involved. Amitabh and Jaya had married four months before the filming of Sholay started while Dharmendra wooed Hema on the sets and the two married five years after the release of Sholay.

12. Jaya Bachchan became pregnant with the couple’s first child Shweta. This had led to several delays in the shooting. And by the time of the film’s release, she was pregnant with their son, Bollywood actor Abhishek Bachchan.

13. The interesting tale of romance on the sets of Sholay is to be sworn by. Dharmendra who was very keen on playing the role of Thakur Baldev Singh went to play the jovial character of Veeru because he was wooing Hema Malini during those days. He gave up the idea of portraying Thakur’s role after Sippy informed him about Veeru’s role going to Sanjeev Kapoor who was also interested in Hema Malini.

14. Before the shoot of the film Sholay, Sanjeev Kumar had proposed marriage to Hema Malini. 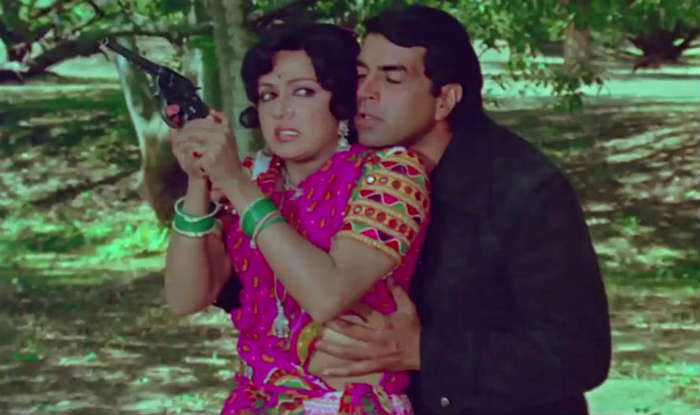 15. Dharmendra who was madly in love with Hema Malini reportedly paid light boys to cause disruptions during the shooting of romantic scenes in Sholay resulting in several retakes.

16. The plot of Sholay ended with a severely injured Gabbar Singh handed over to the police but in the director’s original cut, Sholay has a different ending in which Thakur kills Gabbar. This ending was not approved by the Censor Board as they felt it glorified violence and influenced the mind of people of taking law in their own hands (well in Sholay’s case – Thakur’s legs).

17. The blockbuster movie Sholay was made on the budget of Rs 3 crore. It may look modest to people now but did you know it had over crossed the initial budget. Just imagine the mammoth budget of recently made superhit SS Rajamouli epic drama Bahubali being 250 crore. Say, whatttt. 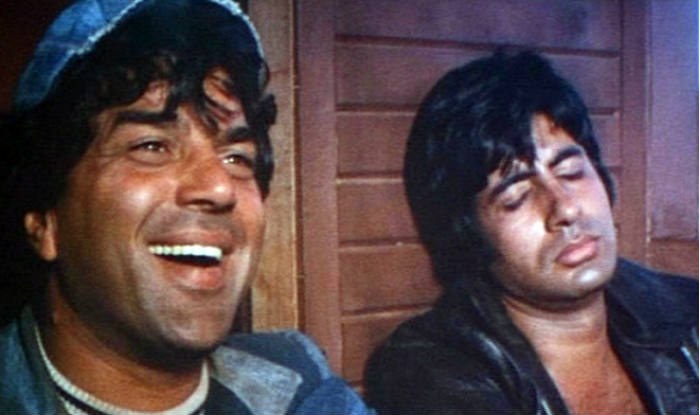 18. And do you know why the budget went overboard – Because of way too many parties and Sippy’s idea of getting everything perfect. He even fired foreign stuntmen and technicians for Sholay.

19. When Sholay was first released on August 15, 2015, it met with lukewarm response that prompted the filmmakers to consider re-shooting few scenes and going ahead with the idea of not killing Amitabh Bachchan’s character of Jai. But it was the positive word of mouth that did the trick for Sholay and the business of cinema accelerated.

20. According to Box Office India, Sholay made about 15 crore in domestic collection during its first run earning it an “All Time Blockbuster” status. Sholay remains to be one of the highest grossing films in the history of Indian cinema, after adjusting the inflation.

21. As much one remembers Sholay, everyone also remembers its failed attempted remake Aag directed by Ramgopal Verma that had Amitabh Bachchan in the villain’s role named Babban.

22. Sholay also had a famous parody Ramgarh Ke Sholay released in 1991, which once again had Amjad Khan in the role of Gabbar Singh. 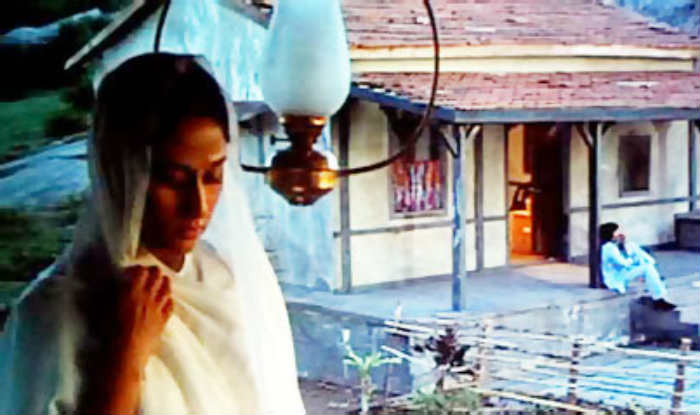 24. Do you remember the iconic scene of Sholay in which Radha (played by Jaya Bachchan) light so many lamp across the haveli, it was shot in 20 days.

25. Sholay turned out to be the path-breaking role for Amitabh Bachchan and led to rise of his stardom. But it was not always so as the actor who was quite low-profile had to strive hard to bag the role of cynical Jai. In fact, Sippy wanted Shatrughan Sinha to play the part of Jai, but dropped idea of having too many big names in the project. Amitabh landed himself role of Jai and as they say rest is history.

26. The fearful character of Gabbar Singh was not only in virtual world of Sholay but in fact there was a dacoit named Gabbar Singh in the 1950’s spreading terror in the Gwalior area. He was famous for cutting off the noses and ears of policemen.

27. There was also a real life Soorma who was an acquaintance of Jagdeep. Soorma Bhopali character played by Jagdeep was named after Soorma who was a forest officer from Bhopal. 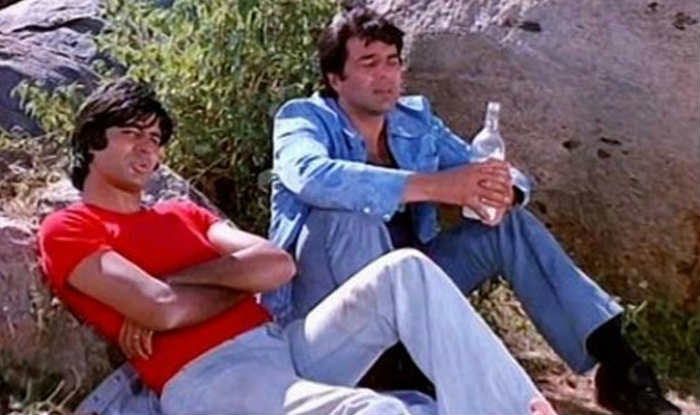 29. Well thanks to the success of Sholay, after which the scriptwriters came to be respected and well paid in Bollywood.

30. Do you know what was actor Sachin Pilgaonkar paid for playing the role of Ahmad in Sholay? – A refrigerator!

31. Amitabh Bachchan was also very lucky to survive on the sets of Sholay when a stray real bullet shot by Dharmendra narrowly missed him. Real bullets were allegedly used in the climax scene of the film.

32. The 3D version of classic was released on January 3, 2014 under the expert eyes of computer animator Frank Foster with 350 people working to convert the film into the digital 3D format at a budget of 25 crore.

34. Sholay was released in Pakistan for the first time after its release on April 17, 2015 jointly by Geo films and Mandviwalla Entertainment with the film’s premiere in the country was held in Karachi. 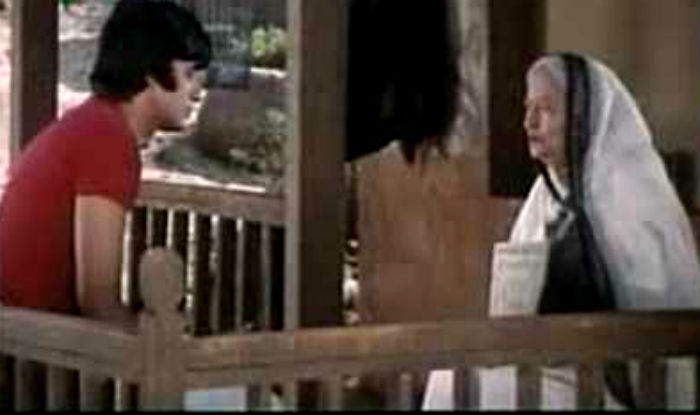 35. You must remember the Sholay’s famous comic scene when Jai convinces Basanti’s mausi (aunty) to let Veeru have Basanti’s hand in marriage was inspired by the real life incident in which Salim Khan had convinced Honey Irani’s mother to approve of her daughter and Javed Akhtar’s wedding.

36. Sholay was shot in Ramanagara, a town near Bengaluru with the area being still popular with local tourists for “Sholay Rocks”. A part of Ramnagram town was renamed Sippynagar in honour of director Ramesh Sippy.

37. The famous dialogue by Gabbar Singh – Kitney aadmi the was finalized after taking 40 retakes. Why so many retakes for this Sholay scene? It was so because the ruthless and scary Gabbar Singh played by Amjad Khan was very nervous.

38. Sholay despite emerging as the biggest blockbuster of the year lost the awards to another Amitabh Bachchan starrer Deewaar.

39. The train robbery sequence in the Sholay was shot on the Mumbai-Pune track near Panvel and reportedly was inspired by the 1939 Hollywood movie, Stagecoach.

40. Sholay has received innumerable honors and recognition. It was declared the “Film of the Millennium” by BBC India in 1999. Also included in Time Magazine’s “Best of Bollywood” list in 2010 and in CNN-IBN’s list of the “100 greatest Indian films of all time” in 2013 is among many honourable lists.

41. The big tribute to Sholay came from search engine Google when it released a film last year. Titled The Hero – A Bollywood Story is about a father and a son and the dream the father had and how the son helps it turn to reality using Google search.

This collection of facts is just a fragment of big boulder of memoirs of one of the biggest classic of Indian cinema. Everything about Sholay has been charismatic, from the unforgettable humming tune of mouth organ to the lightening of lamps to flipping the coin; Sholay will live in our memories forever. We look forward to completing its 50, 60 and 100 years of completion.