Both the movies received the National Film Awards in May. 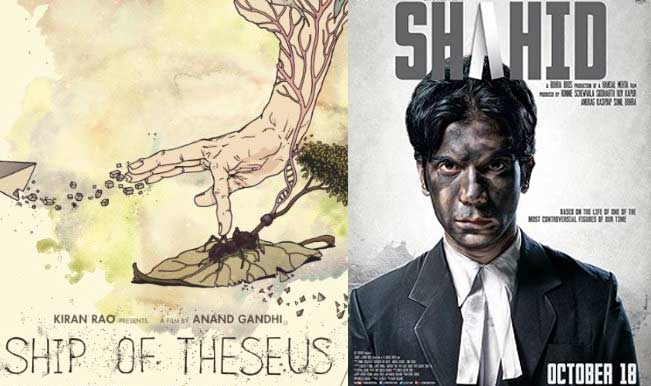 Mumbai, May 14: The cast and crew of National Award winning films ‘Shahid’ and ‘Ship of Theseus’ came together to celebrate the success of their movie in Mumbai on Tuesday. Also Read - Aamir Khan’s Spot Boy And Long Time Assistant Amos Passes Away of Heart Attack

Both the movies received the National Film Awards in May.

Kiran Rao, wife of Bollywood actor Aamir Khan, was involved with the promotion of indie film ‘Ship of Theseus’ for Indian cinema that has been directed by Anand Gandhi.

Rao said if a film is able to touch people’s heart it is the best reward among all awards.

“I think all filmmakers are greedy, we want everything, we want box-office success and critical acclaim and awards and everything else. But I think every filmmaker will tell you that when an audience likes the film, the appreciation is far more fulfilling, far more satisfying than any award can be and I think both these films ‘Ship of Theseus’ and ‘Shahid’ have done that. They have touched people and I think that is the biggest reward you can get as a filmmaker,” she said at the success party.

‘Ship of Theseus’ links together three stories about three different characters, an experimental photographer, an ailing monk and a stock broker. The movie is about human values, justice, identity and change.

The title of the film refers to the title of Theseus paradox, the fundamental question of which is that whether a thing remains the same after all its basic parts are replaced.

The film marked the debut of filmmaker Anand Gandhi into Bollywood.

However, talking about film ‘Shahid’, director Mehta said his movie was not an attempt to bring any change.

“I don’t think that there was a change needed, such films are always being made and there are films that last beyond just a weekend. It has been six months today, still people remember our films and talk about them, so there are different yardsticks to every success,” he said.

‘Shahid’ is based on the life of human rights lawyer, Shahid Azmi, who was murdered in 2010 inMumbai.

A total of 40 films were selected in the feature film category for the 61st National Awards. ‘Fandry’ (Marathi) won the Indira Gandhi award for the Best Debut Film in direction. The award for the Best Popular Film for providing wholesome entertainment was given to ‘Bhaag Milkha Bhaag’ (Hindi).