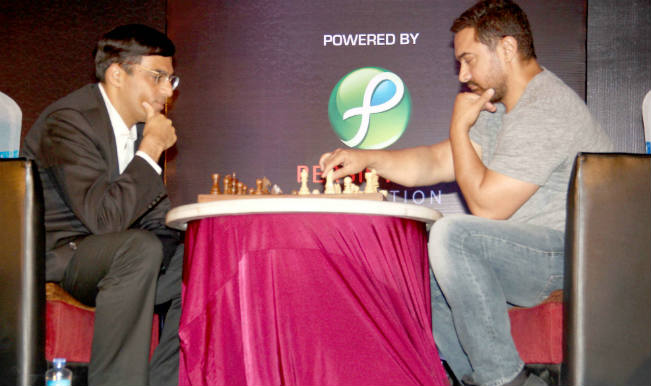 Aamir Khan also known as Mr Perfectionist laid down his arms before Viswanathan Anand, a champion in chess. Aamir Khan played a game of chess against Viswanathan Anand during the inauguration of the third edition of the Maharashtra Chess League. The match between the two genius of their respective fields lasted for about ten minutes and Aamir Khan accepted defeat surrendering his ‘King’. (Also read: Aamir Khan to produce his manager’s directorial debut) Also Read - Aamir Khan’s Daughter Ira Khan Celebrates Valentine's Day With Boyfriend Nupur Shikhare

After losing match, Aamir Khan admitted that he loves to play chess and he had played the game with many Bollywood celebrities. Aamir was recently spotted in China where he was promoting his film ‘PK’. Also Read - Aamir Khan's Daughter Ira Khan Struggled to Smile at Cousin's Wedding Due to Depression - Watch Video

Aamir Khan was also seen playing tennis with Switzerland player Roger Federer. He partnered the Swiss great in the doubles game and seemed to give few words of advice to Federer. Besides his versatility in acting, Aamir Khan is also known for promoting sports in India. Aamir is currently engage with his project ‘Dangal’.