Aamir Khan's daughter revealed that she wants to date THIS co-star from her father's film.

Aamir Khan’s daughter Ira revealed that she would like to date someone who has been her father Aamir’s co-star. During an interactive session with her fans on photo-sharing app Instagram, a fan asked what is she planning to do this quarantine?” To which a fan replied, “Thinking about dating Sanya Malhotra.” Ira added a dash of her humour and she wrote: “Get in line Sanya Malhotra. Me first.” Also Read - Happy Birthday Aamir Khan: Bollywood Fraternity Pour Wishes For Mr Perfectionist on His Special Day 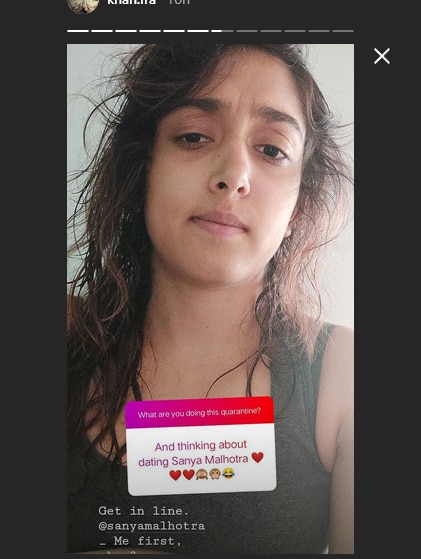 Sanya Malhotra made her debut in the Hindi film industry with Aamir Khan starrer Dangal which was released in 2016 and emerged as the biggest blockbuater of that year and even the highest box office grosser of 2016. Sanya Malhotra then starred in movies like Vishal Bhardwaj’s Pataakha, Ayushmann Khurrana starrer Badhaai Ho and last seen Nawazuddin Siddiqui starrer Photograph.

Aamir Khan, who was last seen in Thugs Of Hindostan, will be next seen in Laal Singh Chaddha. The film, which is the Hindi remake of Hollywood film Forrest Gump and also stars Kareena Kapoor Khan, Mona Singh and Vijay Sethupathi in key roles. The movie has been helmed by Advait Chauhan and is slated to hit the big screens on December 25, 2020.

Aamir Khan is called the Mr Perfectionist of the Indian film industry for his phenomenal performances in movies like Lagaan, 3 Idiots, Rang De Basanti, PK, Sarfarosh, Dil Chahta Hai, among many others.