Here's what Aamir Khan is busy with right now

Aamir Khan recently returned to Mumbai after completing a grueling schedule of Thugs Of Hindostan. But the actor is not off duty. Before he gets back on the set, he made time for a cause that is close to his heart. The actor visited the Zakhangaon village, for his social initiative Paani Foundation and while there, posed for a happy picture surrounded with a number of candid smiles from the children there. Most of us have a long weekend starting tomorrow, and there couldn’t have been a better start to it.Also Read - After FabIndia's 'Jashn-e-Riwaaz', Another Ad Featuring Aamir Khan Lands in Soup. Here's Why

The actor shared this picture on his newly opened account on Instagram and man, the way he does it! It is another testimony of the actor setting precedents. His latest Instagram post serves as a treat to the eye with happy faces of children brightening the screen. Also Read - BTS Jimin's Birthday Special: K-Pop Singer Once Revealed That He Watched Aamir Khan-Kareena Kapoor's 3 Idiots

Less than two weeks into joining the social media platform, Aamir has given the third insight into his life with another series of nine posts. Each Instagram post from the Superstar has broken the internet and has his followers looking forward to the next sneak peek to his life. ALSO READ: Aamir Khan’s Growing Proximity To Fatima Sana Shaikh Has Katrina Kaif Worried? Also Read - Laal Singh Chaddha Release Date Postponed: Aamir Khan-Kareena Kapoor Khan's Film To Now Hit Theatres On This Date 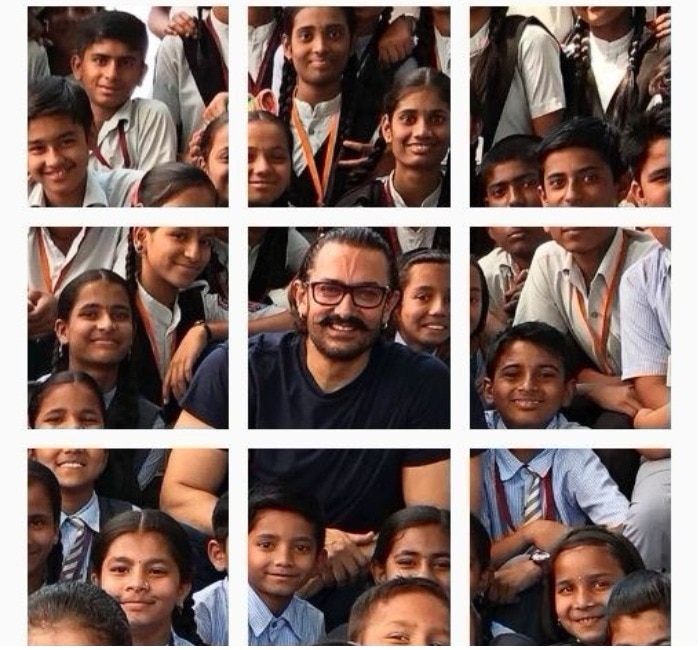 Coming back to Aamir’s visit, after visiting Katgun village in Maharashtra, the latest destination for Aamir’s Paani Foundation is Zakhangaon village in the Satara district where the actor is spending time interacting with locals and spreading awareness about water conservation and management. Aamir Khan in a Facebook Live interaction with his audience had recently urged viewers to support the cause and participate in Shram Daan. In its third year, Paani Foundation will be reaching 75 Taluka’s.

The actor who is currently filming for Thugs of Hindostan, has chalked out dedicated time to personally attend and serve the social initiative. Well, with Paani Foundation Aamir Khan is not just changing lives but also touching hearts, and this picture is proof! This leaves us in anticipation for the next post from the Superstar.