Aamir Khan's film PK might have crossed the enviable Rs 200 crore mark, but the Rajkumar Hirani directorial venture continues to find itself amid controversies. 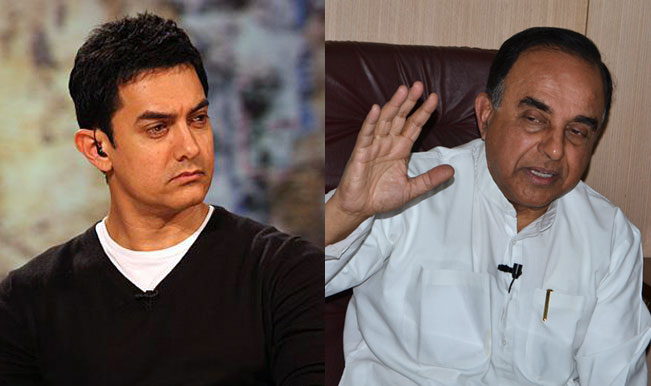 Aamir Khan’s film PK might have crossed the enviable Rs 200 crore mark, but the Rajkumar Hirani directorial venture continues to find itself amid controversies. As if murmurs about Aamir hurting religious sentiments were not enough, here pops up a fresh controversy. Subramanian Swamy, Bharatiya Janta Party (BJP) politician and former cabinet minister, made a shocking revelation about PK. The politico twiddled his thumbs to  generate a new controversy. The man tweeted to question the money that was pumped to craft PK. “Who financed the PK film? According to my sources it is traceable to Dubai and ISI. DRI must investigate,” alleged Swamy. Also Read - Sushant Singh Rajput Death Case: Subramanian Swamy Claims 'Trimurti Agencies Unearthed Major Evidence To Prove Murder By Conspiracy'

Though Swamy has not mentioned in his allegations who exactly funded PK, the fact that he has mentioned ISI and  Dubai in the same breath makes us wonder if underworld don Dawood Ibrahim pumped in his money for the Aamir Khan starrer. Also Read - Aamir Khan's Brother Faisal Khan: Family Gave Me Illegal Medication, Put me Under House Arrest For a Year

We are waiting to see now how PK producer Vidhu Vinod Chopra, Rajkumar Hirani and Aamir Khan respond to this allegation made by Swamy. With this bit of news rolling in, one can say that this episode might open a can of worms, wherein more B-town film producers are likely to come under the scanner, for sure.

PS: Meanwhile PK continues to court controversy. Even Baba Ramdev has reservations about the movie’s subject matter. In his statement, the Yoga guru said, “There should be a social boycott in society against those who are involved in making such movies. It has become a hobby of some people to denigrate Hindu Gods and Goddesses…and insult our saints.” Not only that, Baba Ramdev specifically mentioned Aamir Khan’s name and said, “It seems like big personalities are fond of insulting Hindu deities.”