Action Jackson movie review: Watch at your own risk

Ajay Devgn in Action Jackson is a criminal who rips off small-time goons. Prabhudeva directs an absolute mind-boggling film that is similar to Inception in the only way that it sucks on many level 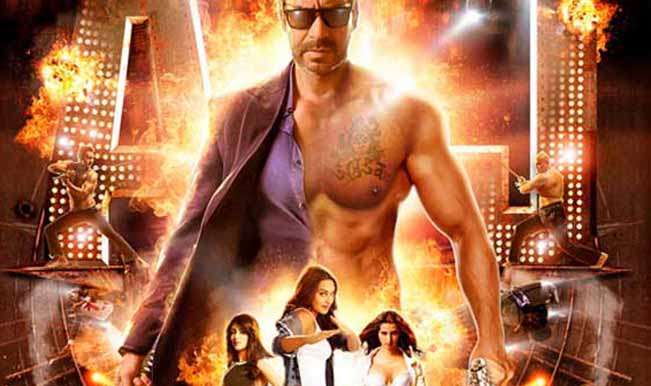 Ajay Devgn in Action Jackson is a criminal who rips off small-time goons. Prabhudeva directs an absolute mind-boggling film that is similar to Inception in the only way that it sucks on many levels, each deeper than the other. Sonakshi Sinha, Yami Gautam, Kunal Roy Kapoor, Anandraj and Manasvi Mamgai are among the others who are in this shameful excuse of a film. Sonakshi Sinha shows her thunder thighs and keeps trying to get Ajay Devgn naked, this is the idea of fun and comedy in the film. Sajid Khan has serious competition but he will die aspiring to make a film as bad as Action Jackson. Also Read - Ram Charan's Fan Gets His RRR Avatar Tattooed and It Will Melt Your Heart

Critics have united for a change in essentially calling the film what is, a steaming pile of crap. The word spoilers cannot be used for revealing certain scenes in expletive detail because a spoiler would unmasking a detail which you could have enjoyed had you stayed unaware that it will happen and seen the film. There has never been anything as bad in the past decades that we have seen which even compares to this film. If you have watched any of the pretentious reviews videos then you will know that they rip open crappy films, they will have a field day with Action Jackson. Also Read - Movies to Watch Out For in 2022: From Alia-Ranbir's Brahmastra to Katrina's Merry Christmas

The film has Ajay Devgn in a double role but it’s not your usual kumbh ke mele main kho gaye the type scenario, nor do they have a Nirupa Roy style mother. They are just two men who look strikingly similar but they are both criminals. Vishy who falls in love with Sinakshi SInha is a small time crook while Ajay or AJ is the Criminally Bad or Criminally Good, according to the makers, superior criminal who is the male version of Uma Thurman from Kill Bill Vol. 1 and Kill Bill Vol. 2 but we have seen more than our share of sword fights to see that Ajay Devgn is holding the sword all wrong. He is more of a chopper slinger with a fancy Hattori Hanzo duplicate sword. Action Jackson can be called a mix of Prabhudeva’s earlier films like Wanted but he ordered more than one film to watch on DVD when he was making the film. He also watched the Transporter trilogy starring Jason Statham and the Hollywood film Wanted starring Angelina Jolie and Morgan Freeman to get ‘inspired’ for the action scenes in the second half.

The dialogues lack any kind of fathomable punch, the songs don’t impress you even if you get drunk and are high on whatever you love and the storyline, well, there just isn’t one. The second half is better put together as a strong of videos rather than the jump cut after jump cut with no continuity in the first half.

Prabhudeva should stick to dancing, Ajay Devgn is spoiling his own legacy that he created as Singham. The Aata maajhi satakli line was epic in Singham but he goes as far as saying Aata majhi fatli. Pretending to be a master assassin and fooling an international mob boss indeed takes balls of steel but the ill-timed comedy scenes especially with Kunal Roy Kapoor are as useless as Sonam Kapoor in Bhaag Milkha Bhaag. The story could have easily gone ahead without them.

Yami Gautam is abused, punched and stabbed in the movie in very gory scenes. The scene in the second half where Yami Gautam is left to die and Ajay aka AJ pulls her hand with blood trickling down her arm is difficult to watch and isn’t really required to be that violent. Yami Gautam is punched and man-handled several times in the movie but somehow she manages to survive being stabbed and still give birth to AJ’s child, a medical miracle which is beyond the realm of logic or medical sciences by an Indian film.

You will be left traumatized and hurt when you realize that doing anything else in the world for those two hours would have been a much more productive use of your time because you would have achieved something or gained experience, you get nothing but a burning sensation to demand your money be returned. But then you need to think, there is nothing that will come to your mind that can compensate for the time and grey cells you lost while watching the film. Don’t watch it; it’s not even worth a watch when it comes on TV in a few weeks.