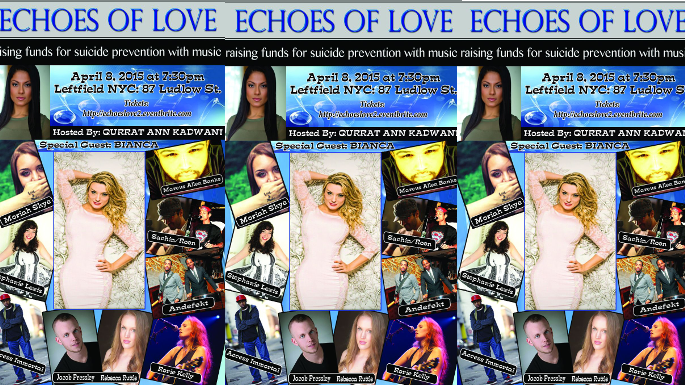 Where words fail, music speaks. It helps express emotions and silence the mind. Indian-American actress Qurrat Ann Kadwani hopes to achieve just that with her annual benefit concert, Echoes of Love. Also Read - Paras Chhabra Hits Back at Jay Bhanushali For His PR Remark, Says, 'I Don't Want This Kind of Publicity'

The concert, dedicated to suicide awareness and prevention is the brainchild of Kadwani, who is known for her powerful performance in her solo off-Broadway show “They Call Me Q.”

Kadwani realized how music can speak to one’s inner self, giving a voice to feelings that are hard to articulate. With the success of her first concert under her belt, she vowed to make it her annual philanthropy event.

“I believe music is the universal language and can express our myriad of emotions and can help us celebrate life as well,” Kadwani said.

This year, the concert will feature a range of musical offerings, including opera, musical theater, hip hop, reggae, pop, R&B, soul and funk.

What makes this year’s show unique is that most of these artists have a personal connection to the cause of suicide prevention.

“When I put out the call for musicians this year, a majority of them told me that they’ve either lost someone to suicide or felt suicidal themselves,” Kadwani said. “The fact that they are able to persevere was impactful for me, and to top it off, they are so incredibly talented.”

Kadwani said she knows what it is like to survive the suicide of a loved one. She innately understands the overwhelming grief, loss, and bewilderment the situation can cause to those who have to deal with this type of loss.

She said she lost her best friend and close relative to suicide.

“When I was 17-years-old, a friend in high school committed suicide the morning after we went to a club in New York City,” she said. “This was the first time anyone I knew who was close to me died.  I couldn’t make sense of it, and I still can’t. I play that night over and over again in my mind, trying to figure out if I missed something.”

Kadwani would have similar feelings a few years later at the age of 21, when another person in her life also acted on their suicidal feelings.

“A close relative of mine committed suicide,” Kadwani said. “I was full of sorrow, rage and guilt. I had to figure out how to deal with it. I felt that I had lost a part of myself.”

According to Center for Disease Control (CDC) suicide takes the lives of 40,000 Americans every year. And South Asians who are often regarded, as the “model minority,” are no exception to this staggering statistic.

“As South Asians, I think often our hardships and feelings are minimized,” Kadwani said. “We have so much pressure to work as hard as possible, to be the best and to recognize that others don’t have the opportunities we have.”

Untreated depression is considered to be the number one cause of suicidal deaths. Only half of all Americans experiencing an episode of major depression and then receive treatment. South Asian Americans are the lowest users of mental health services because of the perceived cultural stigma attached to mental health issues.

“Often, when a loved one is depressed, we are embarrassed, we feel we did something wrong and we don’t know the solutions, treatments or even how to have a conversation about it,” she said. “Suicide is seen as a failure, instead of a result of mental illness.”

In her play “They Call Me Q,” Kadwani talks about bullying, which is one of many factors contributing to suicidal thoughts and tendencies.

She said she believes art is an important medium to create social awareness.

“My background is in theatre with a strong focus in political theatre,” she said. “I learned that art can be used to promote social change.  I believe that the artist has a responsibility to help the public see things differently, to be moved and to believe that they can make a difference in society. With many of my projects, I use entertainment as a way to educate and bit by bit, change the world.”

Kadwani adds: “Through this event, I hope the attendees will learn something because it’s important to know what steps to take when a loved one is going through something.”

Proceeds from the concert will be donated to the American Foundation for Suicide Prevention.