Akhil Akkineni‬ made his debut in 2015 with Akhil

Akhil Akkineni’s third film as the lead actor was formally launched today in Hyderabad in the presence of his father Akkineni Nagarjuna. The superstar sounded the clapboard for the film which will be directed by Venky Atluri who last directed ‘Tholi Prema’ and produced by BVSN Prasad. To make the occasion all the more special, Malayalam star and current heartthrob Dulquer Salmaan, who is in Hyderabad for his upcoming multi-lingual project Mahanati, also attended the launch and switched on the camera for the muhurat shot at Annapurna Studios. Also Read - Bigg Boss Telugu 4: Nagarjuna Welcomes 16 Contestants Locked Inside Controversial House

Thaman S or Music Thaman, who is composing music for the film, was also present at the event. According to reports, the film will start rolling from May and the female lead will be announced next month. An excited Akhil shared the news about his third film on social media and promised fans that he will do his best. Check out the tweet and pictures from the launch below: ALSO READ: Saaho To Miss Sankranthi 2019 Release Date To Make Way For Another Prabhas Film? Read Exclusive Details Also Read - Happy Birthday Dulquer Salmaan: 10 Interesting Facts You Should Know About Mollywood Hunk

And another journey begins. Akhil#3 shall do our best 🙂 pic.twitter.com/FEF6z6QABe Also Read - Brahmastra Shooting to Resume in October With Alia Bhatt And Ranbir Kapoor in Double Shift 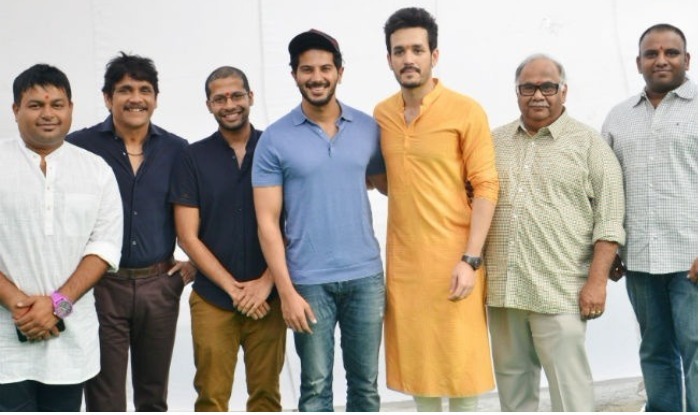 Akhil Akkineni made his film debut in 2015 with the film Akhil and later starred in Hello in 2016. Both the films haven’t been able to help the new actor on the block gain much as far as acting career is concerned. However, this third project might change it all since it is being helmed by Venky Atluri who’s Tholi Prema was loved by most audience and critics. Will his third film be an out and out romantic film or be an action thriller or have elements of both these genres? Nothing much is known as yet but we are sure that we will learn more about Akhil Akkineni’s third film next month before it starts rolling. Stay tuned.