Akkineni Brothers and their lovers have become the talk of the town.

Akkineni Brothers and their lovers have become the talk of the town. Yes, recently Tollywood actress went on a date-drive last night with her love. Earlier we informed you that Naga Chaitanya confessed his love for Samantha. He clarifies his love during the promotion of Premam movie and even said that he would tie knot next year. We heard that Naga and Samantha’s wedding date has been delayed for some time. It seems as if Chaitanya wants to make loud announcements and make the world know that he is happy in the relationship. Akhil and Naga’s love affair has become the talk of the town and fans are quite excited for their wedding. Also Read - Samantha Akkineni Repeats Her Yellow Sabyasachi Suit to Attend Rana Daggubati-Miheeka Bajaj's Roka Ceremony - See Pics

Samantha was spotted hanging out with her beau Naga Chaitanya, her brother-in-law Akhil Akkineni, and his fiancée Shriya Bhupal. The beautiful actress shared the picture on her social media-Instagram and captioned it as “#family”, isn’t that too adorable? Also Read - Samantha Akkineni Bakes Her Birthday Cake, Celebrates With Naga Chaitanya in Lockdown 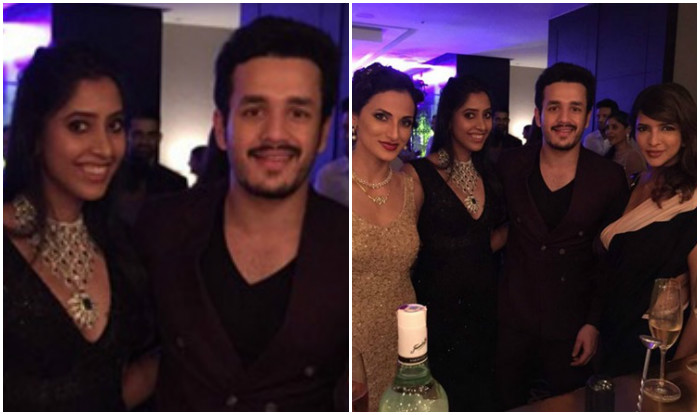 Also Read - Akhil Akkineni Gets Injured on Sets of Most Eligible Bachelor, Shoot Haults For a Week

The picture has been viral and people are going crazy over it. Fans have even liked the family picture and even made several positive comments on it. The picture shows two beautiful couples posing in one frame. Recently, we informed you that Tollywood actor Akkineni Nagarjuna son Akhil revealed his wedding plans. The actor is head over heels in love with Shriya. Actor Akhil is in a long term relationship with fashion designer Shriya Bhupal. Akhil’s ladylove Shriya is the daughter of industrialist Shalini Bhupal and granddaughter of GVK Group’s head GVK Reddy. We heard that Shriya has designed outfits for Alia Bhatt, Rakul Preet and Shraddha Kapoor. ALSO READ: Akkineni Nagarjuna’s son Akhil Akkineni to marry Shriya Bhupal in Italy!

“Akhil and Shriya have been a dating for a long time now and have informed their families about their romance. The talk about engagement is too premature,” says a source close to the Akkineni’s.

The picture has grabbed lot of attention. Akhil and Shriya would get hitched next year. The couple have a destination wedding in Italy. Their wedding date is yet not decided but it is said that they are planning in summer 2017. There is no official announcement by respected families of the couple yet. The wedding will be held in the country’s capital Rome. We even heard that 600 guests from across the globe are expected to grace the event. ALSO READ: Akhil Akkineni and Shriya Bhupal’s engagement card OUT, have a look!

The official invitation engagement card reads that the couple will get engaged on December 9 at GVK house in Hyderabad. “Akhil and Shriya have been a dating for a long time now and have informed their families about their romance. The talk about engagement is too premature,” says a source close to the Akkineni’s. A source was quoted by Times of India saying: “Italy is one destination that’s on their minds as of now. A recce of sorts was done in Naples, but a fancy venue in Rome could also make the cut.” “The wedding will be a grand one. Around 600-odd guests will be flying in to Italy from all around the world,” the source also told Times of India.