Kapoors and Bhatts were seen spending quality time together last weekend. Rishi Kapoor’s daughter Riddhima Kapoor Sahni had shared pictures of Ranbir Kapoor, Alia Bhatt, Shaheen Bhatt, Soni Razdan, Neetu Kapoor from their get together. On Monday, Alia Bhatt and her writer sister Shaheen Bhatt, who are reportedly staying at Ranbir’s house during the lockdown, has shared a few pictures on Instagram where they are seen cuddling Ranbir’s pet dog. Also Read - Hrithik Roshan, Alia Bhatt Invited to Join Academy of Motion Picture Arts and Sciences, Might be Given Voting Rights in Oscars

In one of the sunkissed pictures, Alia can be seen hugging the dog. She wrote, “They make everything better”. On the other hand, Shaheen too posted a picture that shows her playing with the dog. She captioned, “At least we have dogs”. Also Read - Sadak 2: As Mahesh Bhatt Releases Poster, Netizens Bash Him And Decide to Boycott Film

they make everything better 🧡

At least we have dogs.

Netizens are glad to see both of them snuggling a dog and they have pet cats.  Ranbir’s sister Riddhima was completely in aww of the posts shared by Bhatt sisters. She commented heart emojis.

Alia and Shaheeh also took to Instagram to share a picture of their 40 days fitness challenge. In the picture, Alia and Shaheen Bhatt can be seen showing off their sports shoes on the yoga mat along with dumbbells and a skipping rope.  Along with the picture she also wrote, “Here we go again… Day 1 #SOHFIT40DAYSCHALLENGE.” Check out the post below. 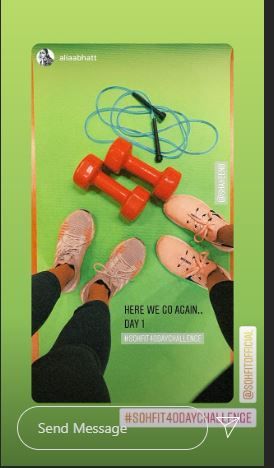 On the work front, Alia Bhatt was last seen in Abhishek Varman’s Kalank alongside Aditya Roy Kapur, Madhuri Dixit, and Varun Dhawan in lead roles. She will be seen in her father Mahesh Bhatt’s directorial film, Sadak 2. The film is a sequel to his previous film with the same name released in 1991. The film will also star Sanjay Dutt, Pooja Bhatt, and Aditya Roy Kapur in pivotal roles.