Alia Bhatt Posted A Picture For Mom Soni Razdan On Mother’s Day And This Is What Ranbir Kapoor’s Mother, Neetu Kapoor, Had To Say

Seems like Neetu Kapoor has taken a liking for Alia Bhatt

Rumour mills are running high that Ranbir Kapoor and Alia Bhatt are very much a couple. They made a grand entry together at Sonam Kapoor – Anand Ahuja’s wedding reception further fueling speculations about their relationship. Later, Alia even said “Yass” to Ranbir in one of her Insta stories but given that neither of them has spoken about their relationship, we cannot confirm anything for sure. However, seems like Ranbir’s mother, Neetu Kapoor has taken a strong liking for the girl. Today, on Mother’s Day, Alia posted a really sweet and special message for her mother, Soni Razdan. She shared a beautiful pic and captioned it, “Hello beautiful mommy. It’s your day. Today & everyday.” Touched by the pic, Neetu Kapoor went all “AWWW” on the pic.Also Read - RRR Song 'Dosti' Released: Ram Charan, Jr NTR Bring Together 'Two Opposing Forces' This Friendship Day

Yes,  Neetu Kapoor commented, “Awwwww” to the pic, making it obvious that she likes Alia. Seems like Neetu approves of her son’s choice. Well, why shouldn’t she. Alia is not only one of the prettiest and talented actresses in Bollywood, but she is also at the pique of her career right now, having proved her worth by choosing challenging roles and films along the way. In this matter, Ranbir and Alia are quite alike. Besides, the two also look very good together, don’t they? Also Read - Alia Bhatt Wears Ranbir Kapoor’s Black Cap Worth Rs 5,887 in His Absence, Says ‘I Miss Him’ – Photos Inside

Meanwhile, take a look at the picture below : 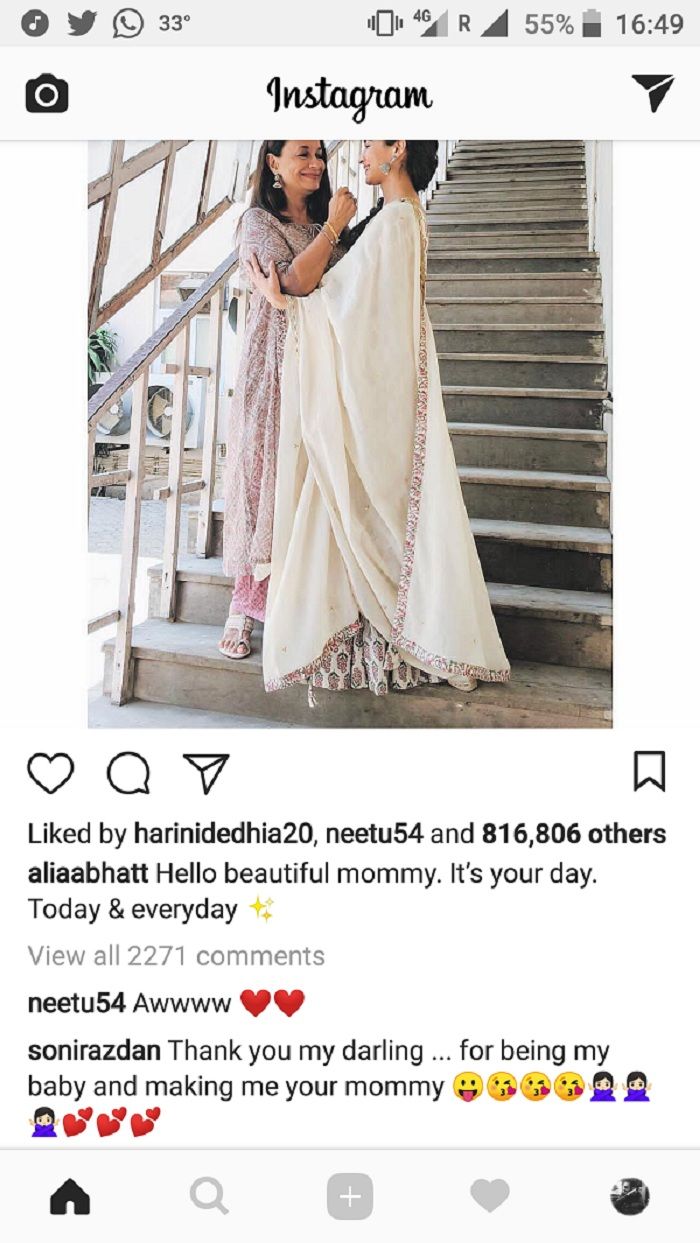 We will get to see Ranbir Kapoor and Alia Bhatt in Ayan Mukerji’s Brahmastra, that is slated to release on August 15 next year. It is only during the shoot of the film in Bulgaria that the two allegedly started spending a lot of time together sparking relationship rumours. Brahmastra is a sci-fi film that also stars Amitabh Bachchan and Mouni Roy in the pivotal role.