Amidst Protests In India, BBFC Clears Deepika Padukone’s Padmavati In UK, To Release On December 1

Victory for Padmavati in UK...

Deepika Padukone starrer Padmavati is right now amid a huge crisis in India. With so much of protests and threats going on against the film, Sanjay Leela Bhansali had to push the date further. Also, one of the major reasons to push it was Central Board of Certification as well. CBFC sent back the film without viewing and certifying it and even asked for some changes in the disclaimer. Hence, the delay. However, before India, people in UK will be able to watch the film right on the said date which is December 1. British Board Of Film Classification aka BBFC cleared Padmavati with zero cuts and 12 A.Also Read - Sooryavanshi: Akshay Kumar To Kick-Start Promotions From This Date And It's Connected To His Mother

In a tweet posted by BBFC, there are all the details of the certification and also the confirmation that the film will release on December 1 in UK as decided. It also reads that the run time of the film is 164 minutes and has ‘Moderate Violence, injury detail.’ Here are the details posted by BBFC. (ALSO READ: Sanjay Leela Bhansali Should Now Release Deepika Padukone, Ranveer Singh, Shahid Kapoor’s Padmavati On Republic Day, Feel Trade Experts) Also Read - CBFC Passes Sooryavanshi With ZERO Cuts And U/A Certificate, Ideal Runtime For Akshay Kumar's Film 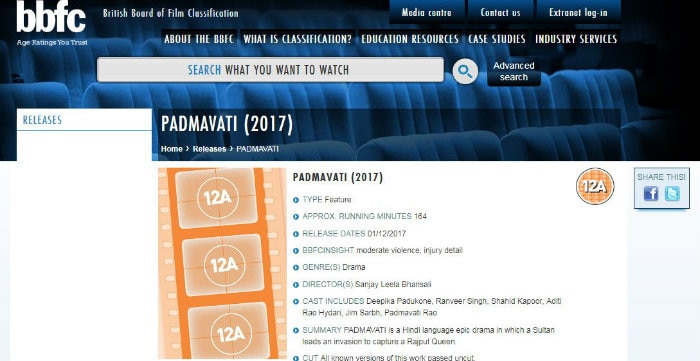 On the other hand, fans in India are still waiting to know the official release date of the film. An excerpt from the official announcement from the makers states, “We are a responsible, law-abiding corporate citizen and have the highest respect and regard for the law of the land and all our institutions and statutory bodies including the Central Board of Film Certification. We always have and are committed to continue following the established procedure and convention. We have faith that we will soon obtain the requisite clearances to release the film. We will announce the revised release date of the film in due course.” Now, dear Padmavati fans, how fair is that?