Mumbai: Bollywood actor Amit Mistry, who was recently seen in Amazon Prime Video’s Bandish Bandits, passed away due to cardiac arrest. The 47-year-old actor breathed his last at his Andheri residence, Mumbai. He has left the industry in a state of shock. The news of Amit’s demise left celebrities heartbroken. Late Irrfan Khan’s son Babil Khan paid tribute to Amit Mistry on social media. Amit Mistry’s death news has left Babil Khan hurt very deeply. Babil described how he got emotional and cried while watching Amit’s web series. “I just heard the news. I never knew this great actor personally but for some reason, the news is hurting me very deeply. The only time I cried in Bandish Bandits was when Amit Mistry had to part with his Devlin (the instrument he had invented). Prayers for his soul. Rest in peace”, wrote Babil.Also Read - R Madhavan, Babil Khan Become 'The Railway Men' For YRF's Debut Web-Series on Bhopal Gas Tragedy | Watch Teaser

Amit Mistry has worked in films like Kya Kehna, Ek Chalis Ki Last Local, Shor In The City and A Gentleman, to name a few. Also Read - Diwali 2021: Irrfan’s Son Babil Khan Shares Photos of Beautiful Home Along With His Favourite Corner

Amit’s co-star in Bandish Bandits also mourned the demise of the actor. She wrote: “Heartbreaking News, Our loss of a gem of an actor. And an amazing human being. I don’t think there is a role he couldn’t portray flawlessly. Be it on stage or on camera! So kind to work with. You will always be on through your amazing work and talent”. Also Read - Irrfan Khan Did Not Want To Belong To This World, Reveals Son Babil Khan in Long Emotional Post 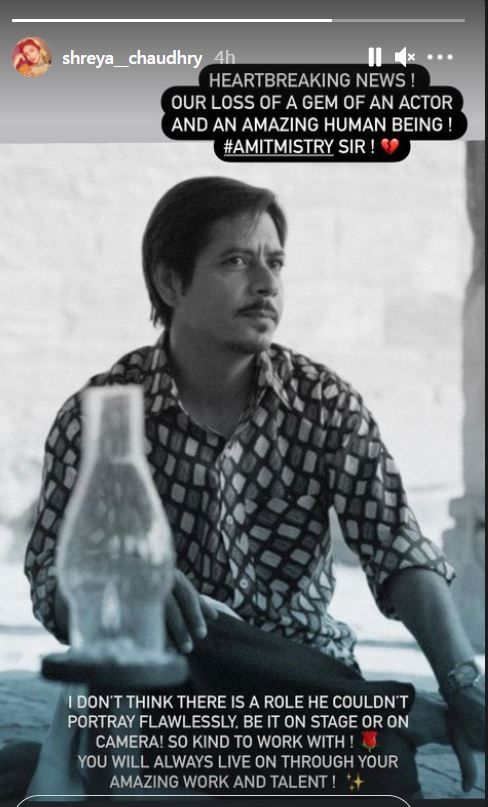