Actor Amitabh Bachchan faces backlash after he shared an opinion offering logic behind the Janata Curfew clapping at 5pm on Sunday, but netizens werent very impressed. Taking to Twitter, the megastar shared an opinion that was sent to him by someone else, suggesting that vibration caused by mass clapping can reduce or destroy potency of the deadly coronavirus. Also Read - Trending Bollywood News Today, March 23: Katrina Kaif And Amitabh Bachchan in Deadly, a Film by #MeToo Accused Vikas Bahl - Read on

He also added in Hindi, “Someone sent this to me. Don’t know how much of this is true.” Also Read - Amitabh Bachchan Cancels Weekly Jalsa Meet Amid Coronavirus Scare? Tweets THIS For Fans

Twitter users were quick to troll him and many demanded an apology for spreading misinformation. 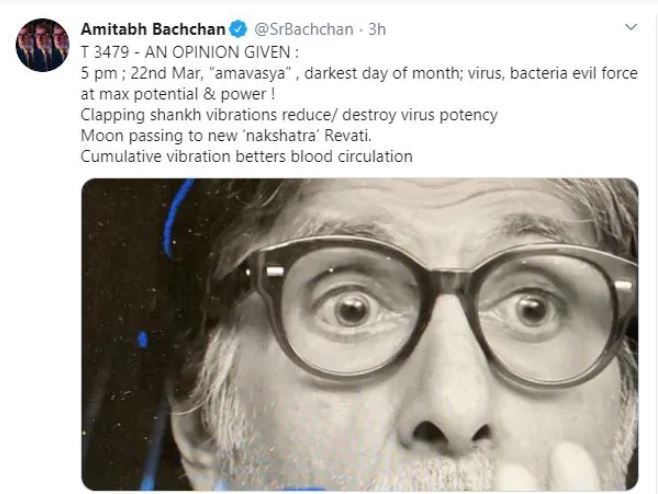 One user wrote, “I demand an apology from @SrBachchan for spreading misinformation through his Twitter account putting millions of lives at stake. #AmitabhBachchan”

Another user wrote: “Hollywood celebrities like Rihanna, Ryan Reynolds and Justin Timberlake donated millions to fight coronavirus. Meanwhile Amitabh Bachchan is sharing watsapp forward on how noise and Amavasya can kill viruses. What sham these Bollywood celebrities are.”

Like the rest of India, the veteran actor also participated in the clapping ritual on Sunday evening along with his family. Big B shared a video on Instagram where he can be seen clapping his hands standing on the terrace while his daughter Shweta Bachchan Nanda, daughter-in-law Aishwarya Rai Bachchan and granddaughters Navya Naveli Nanda and Aaradhya Bachchan ring bells.