Amitabh Bachchan Gives Back to Troll Who Accused Him of Plagiarism, Says ‘Strange And Sad’

Actor Amitabh Bachchan has given back to a troll who criticized him and claimed that the actor had plagiarised a quote by scientist Charles Darwin as he did not bother to give credit to him. The Brahmastra actor posted on Facebook, “It’s not the strangest who survive, not the most intelligent, but the one most responsive to change. ” ~ Ef k.” (sic) Also Read - FWICE Writes to Amitabh Bachchan For Financial Help as Shoot-Suspension Extends to April 14

To which, the troller commented, “Very strange and sad to note that you have now resorted to plagiarism. This is a quote by Charles Darwin at least you could have mentioned the same after the quote….. very sad and shameful.” Also Read - Amitabh Bachchan Faces Flak Over 'Amavasya' Tweet, Deletes Post Later 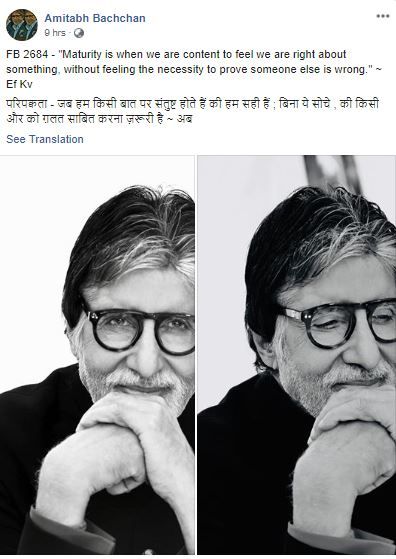 Giving back to the troll, Amitabh commented, “Sir Mr Sam G .. if you would care to notice the post, it is written within quotes(“), which indicated that it is not mine .. also please note that after the quote is over and (”) indicator is closed, there is a ~ Ef k written .. when this indication is given it shows where the quote came from .. The Ef is my extended family member whose initial is ‘k’ .. he sent me this , and i thought it was a good quote to share with the rest of my followers on FB .. some of the followers are English challenged, so I translated the quote to the best of my ability in Hindi .. that translation does not carry the (“) mark because it is mine .. and so at the end of the Hindi, there is a ~ mark, with my initials AB, which in Hindi (added the Hindi letters).”

In the following up comment, he wrote, “It is ” very strange and sad to note “ ( using your words as within quotes ) that you have resorted to chide me , without reading the post carefully .. ’” very sad “ .. I was going to use your own language and add ‘shameful’ , but my ethics do not permit me to .. whenever there has been an error on my part and I have been told of it I have never hesitated to either correct it, remove it and have sought an apology .. I am not ashamed of myself despite your rather harsh and obtuse verbosity .. be safe , be in precaution, and if you are from India , stay indoors and do not step out for India is in a lockdown.” 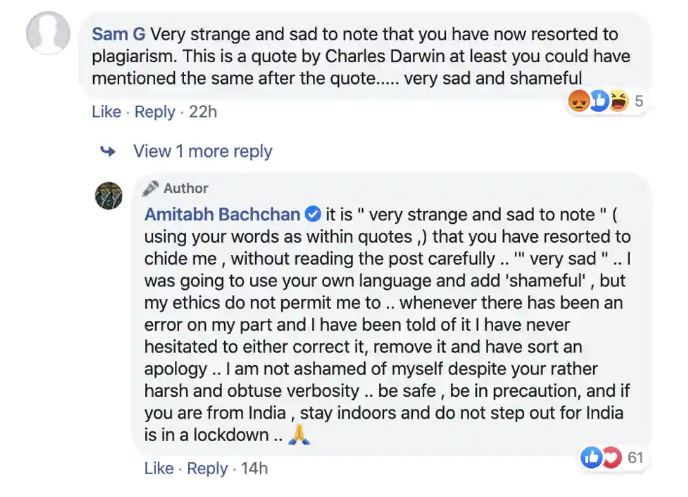 Meanwhile, on the work front, Amitabh Bachchan will be next seen in Chehre alongside Emraan Hashmi and Brahmastra alongside Ranbir Kapoor and Alia Bhatt.

He will also be seen in Jhund where he will essay essays the role of a soccer coach who motivates slum children to play soccer and becomes the founder of the village kids team of football. The movie is based on 73-year old Vijay Barse, a man who had changed the lives of hundreds of slum children through soccer. A retired sports teacher, Vijay founded an NGO called Slum Soccer and managed to rehabilitate street kids by keeping them off drugs and crime by turning them into soccer players and eventually building a whole team.