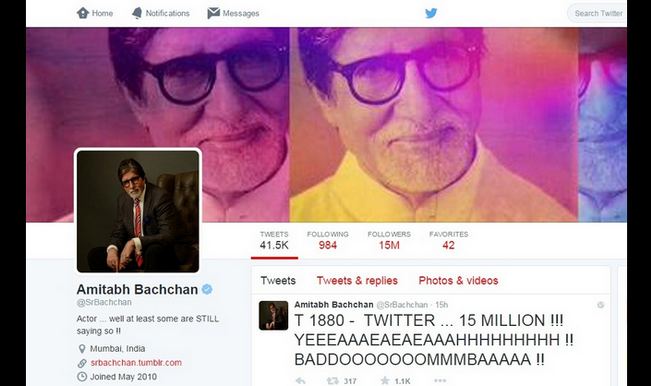 The Shahenshah of Bollywood continues to maintain his No.1 position in the social networking arena as well. Amitabh Bachchan, legendary Bollywood actor, was one of the first to join Twitter early on. His fan base on the popular social network is ever growing, and the actor has now completed over 15 million followers on Twitter! Big B, as he is fondly called, operates from the Twitter handle @SrBachchan. He posted on May 28, saying, “T 1880 – TWITTER … 15 MILLION !!! YEEEAAAEAEAEAAAHHHHHHHHH !! BADDOOOOOOOMMMBAAAAA !!” The actor is visibly ecstatic with his newfound fans. Also Read - Deepika Padukone all Set For Her Second Hollywood Venture as She Signs With Talent Agency ICM

Amitabh Bachchan is very active on Twitter and Facebook, and has been writing a daily blog on Tumblr for the last seven years (which was earlier published on BigAdda.com). He also has an Instagram page where he shares select pictures. The award-winning actor also often retweets pictures and anecdotes by his fans – whom he calls the EF or Extended Family – and shares it all on his Facebook page, too.

In terms of Twitter followers, Sr Bachchan at 15 million is still ahead of his younger rivals Shah Rukh Khan (13.3 million), Aamir Khan (12.8 million) and Salman Khan (12.1 million)! It seems staying on top of things is a way of life with Mr Bachchan!