Reminiscing the moments, the 72-year-old took to micro-blogging website Twitter to share the image, which was taken on the sets of his the 1979 film “Kaala Pathar”. 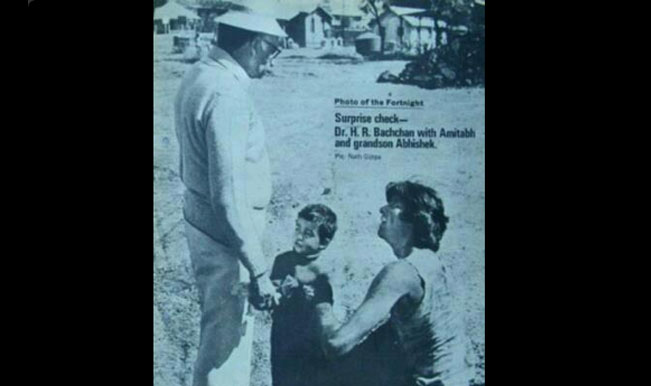 Reminiscing the moments, the 72-year-old took to micro-blogging website Twitter to share the image, which was taken on the sets of his the 1979 film “Kaala Pathar”. “Three generations, one frame …(on the sets of ‘Kaala Pathar’ in Pune, at Raj ji’s farm),” the “Paa” actor tweeted alongside the picture perfect capture. “Kaala Patthar” is a 1979 Bollywood action drama film produced and directed by Yash Chopra.  Arjun Kapoor ‘suits up’ Also Read - Rhea Chakraborty To 'Bounce Back' On Silver Screen With Amitabh Bachchan, Emraan Hashmi Starrer Chehre

Actor Arjun Kapoor, often seen on the big screen in a casual and scruffy look, treated his fans on social media to an image in which he looks suave in a three-piece suit.  The 29-year-old actor took to photo-sharing website Instagram to share the black-and-white image. He leans on a wall and seems as if he was in deep thought.

“Playing with shadows as time stands still in black & white #suitup,” the “Tevar” actor tweeted. The “Ishaqzaade” actor keeps updating his fans and followers about his personal and professional achievements by frequently sharing photographs and news of himself on social media.  On the big screen, Arjun was last seen in “Tevar” opposite actress Sonakshi Sinha.

“Vishal is a dear friend and unarguably the most talented musicians I know. To say he inspires me is a gross understatement. Im so happy and humbled to have had his encouragement and support,” Sarah said in a statement. On the big screen, the 31-year-old actress will next be seen in Jeff Goldsberg’s “Adhoori Dhun”, in which she essays a singer. Image credit: twitter