Sonam Kapoor celebrated her 34th birthday today and threw a huge bash where many celebs like Varun Dhawan, Malaika Arora, Arjun Kapoor among others were spotted. Ananya Panday who recently made her big Bollywood debut with Student of The Year 2 dropped by to wish the actor. At the bash, Ananya could not stop ‘fangirling’ over Varun Dhawan and even shared a picture with the actor on Instagram. Also Read - India is 'Very Inspiring', Its Research, Manufacturing Critical to Fighting COVID-19, Says Bill Gates

Ananya was spotted by the paparazzi along with the Kapoor sisters Shanaya Kapoor and Khushi Kapoor. Ananya looked stunning in a white tank top which she teamed with white shorts and pink blazer. Later, the young actor took to her Instagram stories to share a picture with Varun Dhawan and captioned it, “Fangirling. Forever fave!!!” The picture was first shared by Karan Johar and later Ananya shared the same. Also Read - US: 7.5 Magnitude Earthquake Hits Off Alaska Coast Triggering Tsunami Warning 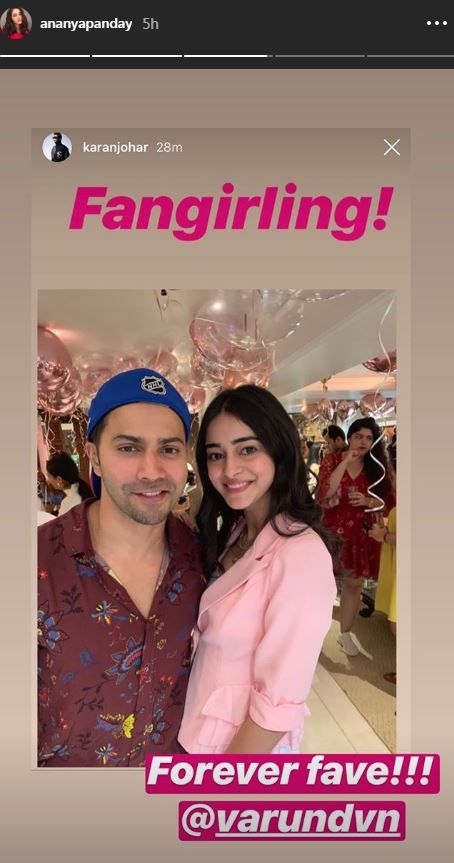 Reacting to the controversy on ‘faking’ her University of Southern California admission, the actor yesterday shared pictures of her USC documents on Instagram. Though she did not want to explain herself, she was bound to after the constant ‘rumours’ buzzing on social media. Sharing a long post explaining herself, she wrote, “I didn’t want to do this. I didn’t feel like I needed to explain myself to anyone, but the rumours that I faked my admission at USC have been doing the rounds for a while now. They’ve been getting out of hand, and it’s even more unfair and sad that my family and friends have to go through this.”. Also Read - IPL 2020 Points Table Latest Update After CSK vs RR, Match 37: Rajasthan Royals Beat Chennai Super Kings to Rise to 5th Spot; KL Rahul And Kagiso Rabada Lead Orange Cap, Purple Cap Battle Respectively

On the professional front, Anaya Panday will next be seen with Kartik Aaryan and Bhumi Padnekar in Pati Patni Aur Woh.