Recently, actor Ankita Lokhande celebrated her birthday with fiancé Vicky Jain, close friends and family. She shared a couple of pictures, dance videos where the Manikarnika actor was having fun. After her pictures, videos went viral, a section of people on the internet trolled her for celebrating her birthday as this year Sushant Singh Rajput passed away. She was slammed for inviting Ssandip Singh, who was questioned in the death case of SSR. Also Read - Ankita Lokhande Gets Trolled For Celebrating 3 Million Followers on Instagram Without Giving Credits to Sushant Singh Rajput

Ankita was Sushant’s ex-girlfriend, and she even paid tribute to him at the recent award ceremony. It seems like Sushant’s fans didn’t like her enjoying life with BF Vicky and posting happy pics of birthday. Also Read - Ankita Lokhande Dances to Garmi Song With Rashami Desai on Her Birthday, Kisses Fiance Vicky Jain

The TV actor didn’t reply to trolls, instead shared a couple of cryptic Instagram stories, addressing the trollers that silence is the best way to deal with all the problems. The recent post shared by her read, “Balance your throat chakra by practicing silence. Fast from talking for a day and just observe rather than react”. Also Read - Watch: Ankita Lokhande, Usha Nadkarni From Pavitra Rishta Pay Tribute to Sushant Singh Rajput at Zee Rishtey Awards 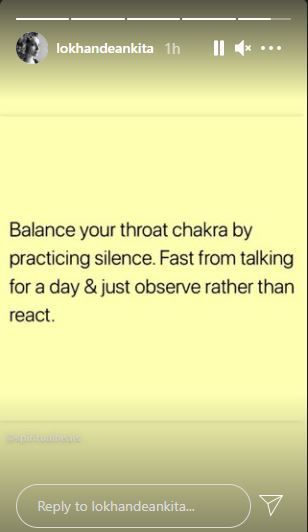 Ankita Lokhande celebrated her 36th birthday on Saturday. Her dance video with Rashami Desai was also viral where the two grooved to Garmi song that’s originally picturised on Nora Fatehi and Varun Dhawan.

The Pavitra Rishta actor wore a golden glittery dress for her birthday. She was even clicked while kissing beau Vicky Jain.

Sushant Singh Rajput passed away on June 14, 2020, and Ankita had supported his family and thrown her weight behind SSR’s sister Shweta Singh Kirti after she requested for a Central Bureau of Investigation (CBI) investigation into the death of the late actor.