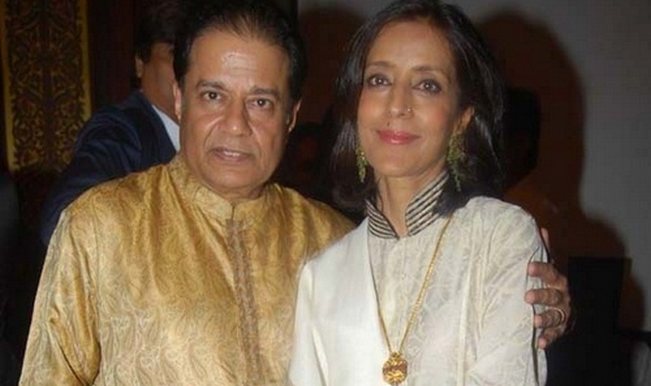 Mumbai, Nov 25: Anup Jalota’s ailing wife Medha died in the US Monday due to a liver failure following a second heart and first kidney transplant, the bhajan singer’s official spokesperson confirmed. She was 59. Medha was admitted to a hospital in New Jersey two months ago. She received a donor and the surgery took place Monday, but she couldn’t survive it, Pritam Sharma, the spokesperson, told IANS. Also Read - Anup Jalota Now Speaks on Sushant Singh Rajput Death Case, Says 'It's Not a National Security Issue'

Her last rites will take place in New Jersey Tuesday, he added. Also Read - Anup Jalota Comments on Jasleen Matharu's 'Glamorous Dressing', Says he Wouldn't Have Married Her Even at 35

Medha, niece of former Prime Minister Inder Kumar Gujral, is survived by an 18-year-old son Aryaman. She was earlier married to acclaimed filmmaker Shekhar Kapur, who mourned her death on micro-blogging site Twitter soon after the news of her demise came. Also Read - Anup Jalota Reacts to His Viral Wedding Pictures With Jasleen Matharu, Says 'I Play Her Father'

“Probably the bravest person I ever knew. Medha Jalota. Rest in Peace Medha, You showed that life can be lived and loved despite all odds,” Kapur posted.

Actress Kunickaa Sadanand wrote: “With a heavy heart n tears in my eyes I regret to inform all. The lovely lady, a beautiful soul, Mrs. Medha Jalota, wife of Shri Anup Jalota is no more walking the path of life with us.”

“She has left us and passed over to a more beautiful peaceful n painless horizon. May her soul rest in peace. My sincere condolences with the family – they fought a battle bravely with grace during her illness. May they continue to have strength.”

Veteran actress Poonam Dhillon tweeted: “Woke up to the extremely sad news of a dear friend Medha Jalota passing away in NY. My deepest condolence to @anupjalota. Will miss her.”

Medha was “brave and beautiful till the very end”, tweeted Shobhaa De, while writer Bharati S. Pradhan, who penned the book “Heartfelt: The Inspirational Story of Medha Anup Jalota”, shared her condolences too.

“In my book #Heartfelt by @ombooksdelhi, how Medha Jalota’s spirit & Anup’s undying positivity kept her alive for 12 years after heart transplant,” she added.