Arjun Rampal Drugs Case Updates, Nov 09: The actor has been summoned by the Narcotics Control Bureau after a producer's wife got arrested on Sunday.

Arjun Rampal Drugs Case Updates: The Narcotics Control Bureau (NCB), on Monday, conducted a raid at actor Arjun Rampal’s house in Mumbai in the Bollywood drug case. The actor was summoned by the agency later in the day for questioning in the case. The development came right after the federal anti-narcotics agency summoned Bollywood producer Firoz A Nadiadwala and arrested his wife Shabana Saeed in the same case. Also Read - Arjun Rampal Birthday Celebrations: Rock On Actor Shares Adorable Pictures With Gabriella Demetriades, Son Arik

In the photos and videos that went viral on social media after the NCB officials were spotted at Ramapal’s house on Monday, the team was seen carrying a blue suitcase out of the actor’s house. Arjun’s name has surfaced in the case earlier as well when the NCB recovered an alleged WhatsApp chat in the Sushant Singh Rajput death case. Also Read - Kshitij Ravi Prasad, Ex-Dharma Production Employee, Granted Bail By NDPS Court After 2 Months of Arrest 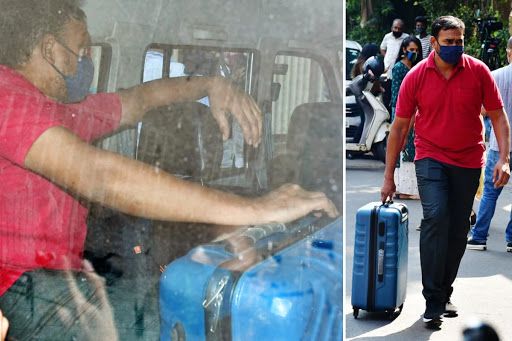 Earlier last month, Agisilaos Demetriades, brother of Arjun’s partner Gabriella Demetriades, was arrested in the case for procuring and selling anti-narcotics substances. An NCB official had informed Mid-Day that the 30-year-old South African was found in possession of marijuana and alprazolam when the cops nabbed him at a resort in Lonavala. “He is part of a major drug syndicate in Bollywood. During our probe, we found that he was in touch with various peddlers arrested in the case,” said the NCB. Check out the latest updates in the case here. Also Read - Kapil Sharma Body-Shames Twitter User For Saying He'd be Arrested Soon Like Bharti Singh in Drugs Case