Asin-Rahul Sharma, Robin Uthappa-Sheethal Goutham: Top 9 couples who had a fairytale wedding in 2016

2016 looks like the year of grand weddings and also a year of some divorces. The B-town celebrities have also gone over it. Starting from celebrities love affairs till their lavish weddings and some heart breaking separation, nothing seems to be hidden from media's shutterbugs.

Someone has rightly said, “till death do us part”. Marriage is one of the best feeling for which one waits and what can be the best than getting married with your soulmate and spending the rest of the beautiful life along with him or her by your side. 2016 looks like the year of grand weddings and also a year of some divorces. The B-town celebrities have also gone over it. Starting from celebrities love affairs till their lavish weddings and some heart breaking separation, nothing seems to be hidden from media’s shutterbugs. Some of the celebrities have tried their level best in hiding their love stories from media’s glare and have surprised their fans by sharing their wedding pictures. ALSO READ: Rani Mukerji & Aditya Chopra, Mark Zuckerberg & Priscilla Chan: 13 Couples who were blessed with a baby in 2015.Also Read - Preity Zinta and Gene Goodenough Welcome Twins, Name Them 'Jai and Gia'

The beginning of every year is full of surprises and unveils top secret which leaves one in doubts. This year also some celebs decided to have secret wedding with low-key affair and later on announced their wedding news on social networking sites. We have a long list of celebrities from Bollywood industry, sports, television industry who have taken the wedding vows with their soulmate in this year. Have a look at their beautiful  journey: Also Read - Sanaya Irani and Mohit Sehgal's wedding album is OUT on Instagram! Telly couple’s marriage pictures are way too adorable 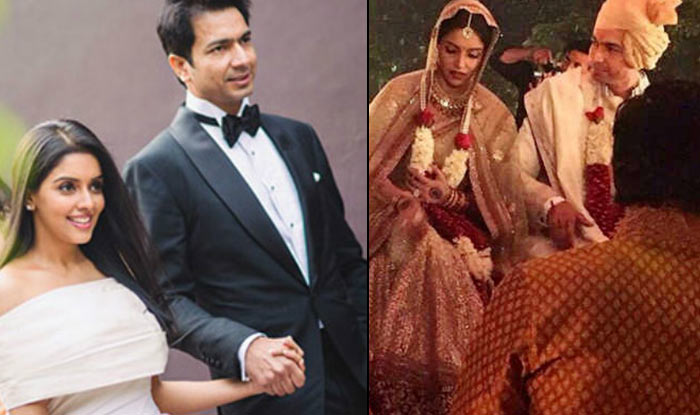 The South actress Asin Thottukmal recently got hitched with Micromax CEO Rahul Sharma on 19 January. Asin is now officially Mrs Asin Rahul Sharma. The duo’s affair was one of the most perfect fairy-tale wedding for the entire B-town industry. Their wedding ceremony was held at Dusit Devrana resort in New Delhi. Apparently, Akshay played the cupid and introduced Asin to Rahul. ALSO READ: Asin & Rahul Sharma’s fairytale wedding will surely give you ultimate love goals! 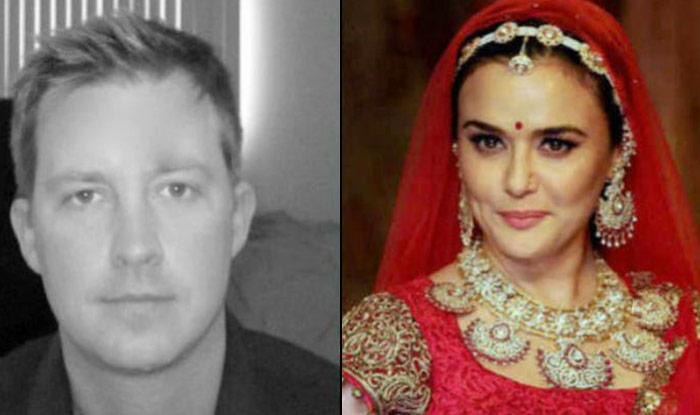 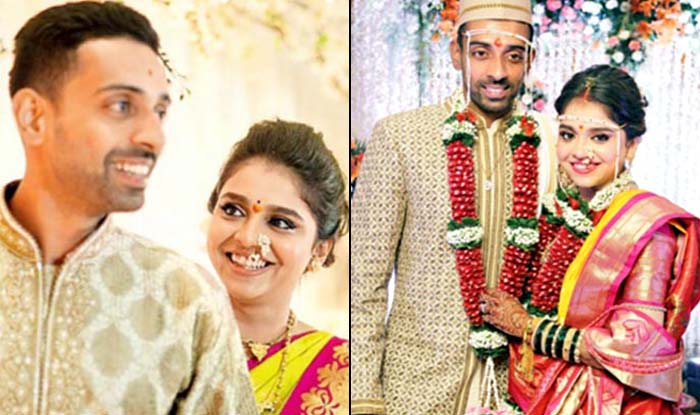 Mumbai Indians player Dhawal Kulkarni recently got married to her ladylove Shradha Kharpude on March 3, 2016, Thursday. Shradha is a well-known fashion coordinator, in Femina magazine. Their wedding ceremony took place at the St Regis hotel in South Mumbai. Dhawal Kulkarni met his wife met four years ago through a common friend and soon fell in love with each other. Dhawal a player of Mumbai Ranji team tied the nuptial knot with his long time love after getting engaged in June 2015. ALSO READ: Dhawal Kulkarni & wife Shradha Kharpude wedding pictures: Fairy-tale Maharashtrian marriage for Indian cricketer! 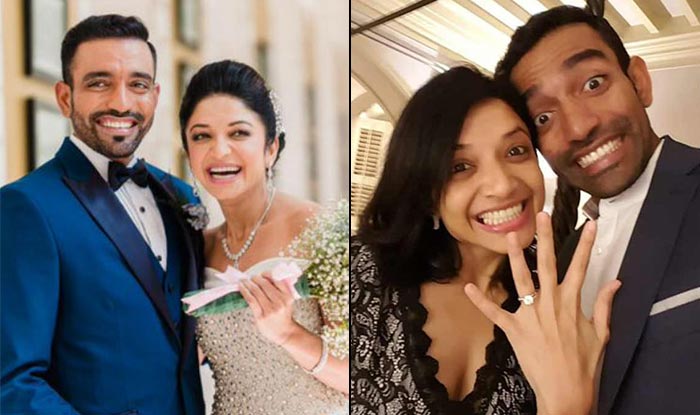 One more wicket down, Indian cricket team player Robin Uthappa tied the knot with his long time girlfriend Sheethal Goutham who is a former tennis player. Their wedding rituals were according to Christian wedding. The couple were in a relationship and finally decided to get engaged on November 11. ALSO READ: Indian cricketer Mohit Sharma marries girlfriend Shweta: See Wedding pictures of beautiful couple. 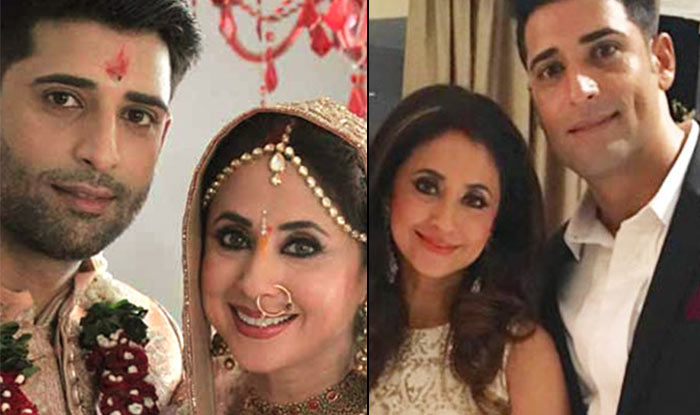 Urmila Mantondkar got hitched to Kashmiri businessman Mohsin Akhtar Mir on March 3 in a private ceremony. Urmila’s husband is 10 years younger to her and their lavish wedding ceremony took place at Urmila’s Bandra residence in Mumbai. The couple decided to have a traditional Hindu ceremony including pheras and we also heard that, the newly-married couple are now all set to have a super lavish Muslim wedding in the coming week.Their wedding was a low-key private affair and only their family and close friends graced their auspicious ceremony. Urmila and Mohsin were dating each other since four years and finally decided to get settle. ALSO READ: Urmila Matondkar & Mohsin Akhtar Mir’s wedding album: Inside marriage pictures will give you love goals! 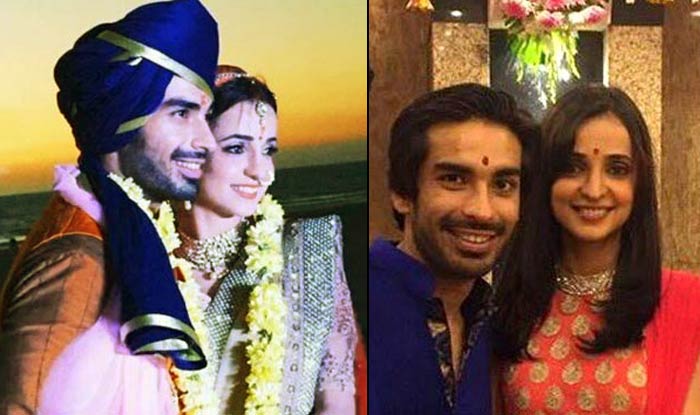 Sanaya Irani and Mohit Sehgal tied the nuptial knot on January 25, 2016 and their lavish wedding took place at Plush beach resort, Planet Hollywood located in South Goa. Further the resort also had a private beach which made it an ideal destination wedding. The lovebirds first met on the sets of Miley Jab Hum Tum and since then they have been dating for last five years. The newly weds are called as MoNaya by their fans. ALSO READ: Sanaya Irani & Mohit Sehgal gets married: Inside pictures & video of grand wedding will make you smile! 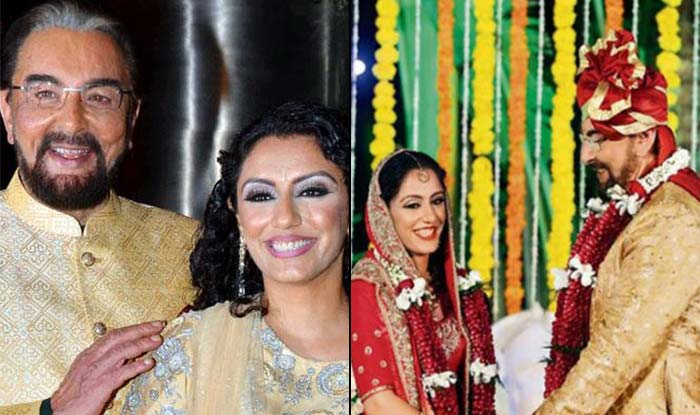 Veteran actor Kabir Bedi got hitched with his close friend and long-time love Parveen Dusanj on January 15, 2016. On the same day, Kabir celebrated his 70th birthday and had a star-studded wedding. Before their big day, the duo visited gurudwara on January 14 and few close friends from industry attended his wedding. ALSO READ: Kabir Bedi marries partner Parveen Dusanj on 70th birthday (View pics) 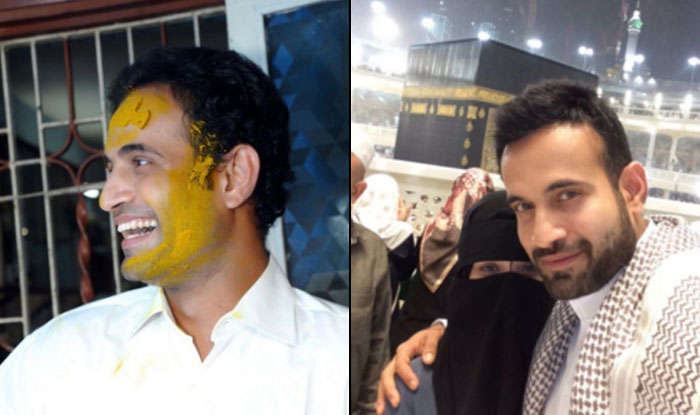 Another Indian cricket team player got married recently. Irfan Pathan began new innings of his life along with his ladylove Safa Baig- the Jeddah based model on February 4, 2016 in Saudi Arabia. Safa Baig is a 21-year-old model, who is currently working for a PR firm, is also a popular nail artist. Irfan met his soulmate two years back in Dubai and decided to take their relationship on the next level. The 31-year-old Irfan has hosted a grand lavish wedding reception in Vadodara on Tuesday evening. Irfan’s family kept a low-key affair at the Mecca where few close family and friends were invited. Soon after the wedding rituals the Pathan family had organised a dinner at Al-Hindaweeyah hotel in Mecca. ALSO READ: Irfan Pathan wedding reception: Robin Uthappa, Mohammad Kaif, Yuvika Choudhary attend grand celebration 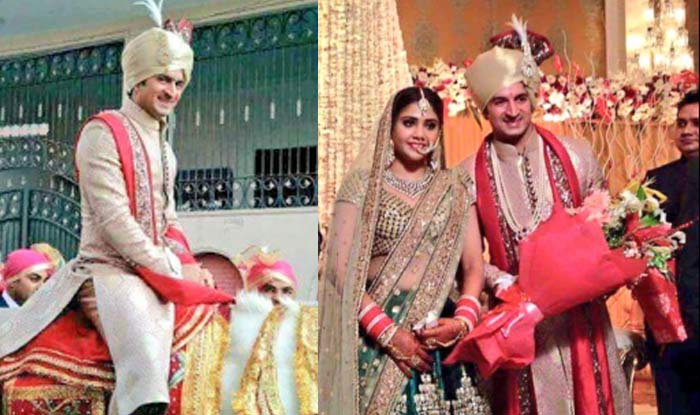 Indian pacer Mohit Sharma got hitched with his longtime love Shweta on March 8, 2016 Tuesday. Their wedding ceremony took place at the Hotel Leela Palace in Delhi. Mohit got engaged to Shweta who is a Kolkata girl, staying since January 17, 2016 in Delhi. Their lavish wedding ceremony was a private affair which was attended by close friends and family including some Indian cricket team like Unmukt Chand, Virendra Sehwag. ALSO READ: Indian cricketer Mohit Sharma marries girlfriend Shweta: See Wedding pictures of beautiful couple

We wish every couple a happy married life and loads of happiness in the world.