A saga of two clans presented in the grandest of setting. Check out the Promo inside.

How does the epic saga of Baahubali looks like when it gets made for the small screen? Well, it looks exactly like “Aarambh“. The promo of this new series from the shelves of Star Plus was released by the makers and the cinematography has swept us off the floor. The characters, their attires, their voices all are as brilliant as the story.Also Read - Tanishaa Mukerji And Tanuja's Throwback Andaman And Nicobar Holiday Pictures Will Give You Major Mother-Daughter Goals

The show is about the survival of two clans; The Dravidians and the Aaryan. This is the story of Devsena, played by Karthika Nair who looks stunning in the promo. Tanuja Mukherji is also marking her debut on the small screen with this 100 episode series. She is seen as Hahuma, the spiritual leader of the Dravidians who will be seen prophesying the future of both Dravidians and the Aaryans. Also Read - Aarambh 9 September 2017 Written Update of Full Episode: Jaldev And Devasena Declare Their Love And Kill Mahisha Together

Check out the pictures: Also Read - After Comedian Sunil Grover, Actress Karthika Nair Down With Dengue 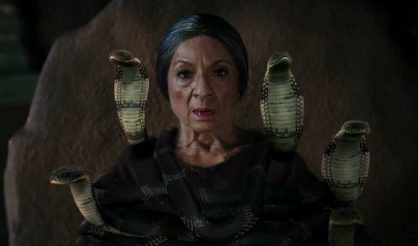 In the promo Tanisha Mukherji has the intense look where snakes are wrapped around her neck. She commands the throne to be taken by Devsena and explains the responsibility it entails. She will guide the Dravidians by seeing their future and will guide Devsena to save their clan from the ambush of Aaryans. Karthika Nair looks every bit of the queen her character Devsena commands her to be. She will be seen as a skillful warrior heading the Dravidian clan to save them from the wrath which Aaryans will impose on them. Aaryans are in the search of the Sapt Sindhu and the Dravidians fight with them to save what’s their own. Varundeva, played by Rajniesh Duggall, will be a warrior of the Aaryan clan. The stars will cross for Devsena and Varundeva on the battle field.

Aarambh comes directly from the inks of the writer of Baahubali K.V Vijayendra Prasad. He has penned down the epic saga to suit the small screen and the promo is giving us goosebumps. In the promo, Hahuma talks about how people are the strength of any civilization and how they lead the same to destruction by becoming it’s weakness. (Also Read: Aarambh: Rajniesh Duggall and Tanuja Mukherji reunite for Bahubali 2 writer’s TV show!)

Talking about her role in the epic creation, Tanuja said,”I am playing the role of Hahuma. This role is distinctive in many ways. She is basically clairvoyant, who can see the future. She can’t predict future, she can just give suggestions.”

We can’t wait for “Aarambh” to have an aarambh on our TV screens. Have a look at the promo and tell us if you liked the grand presentation and the heroic characters.