Bhabiji Ghar Par Hain actor Saumya Tandon who gave birth to a baby boy on January 14, 2019, has now revealed the name of her newborn. She has named him Miraan after a lady from Singapore suggested the name. Also Read - Kareena Kapoor Khan Tries Her Hands at Pottery With Taimur in Rs 2k Striped Sweater

Saumya told Hindustan Times, ““Though, the name suggested by a lady from Singapore was Miran, it was a girl’s name so I added an extra ‘a’ to it. It’s a Persian word and means king of kings. Finally, we registered the name as Miraan Tandon Singh. Many suggested Shaurya as well which is a combination of my name and my husband’s name Saurabh. But I wanted a unique name so Miraan it is.” She will also be sending a personalised gift to the lady who suggested the name. Also Read - RIP Diego Maradona: Shah Rukh Khan, Ranveer Singh, Kareena Kapoor Khan, Others Pay Tribute to Greatest Player of All Time 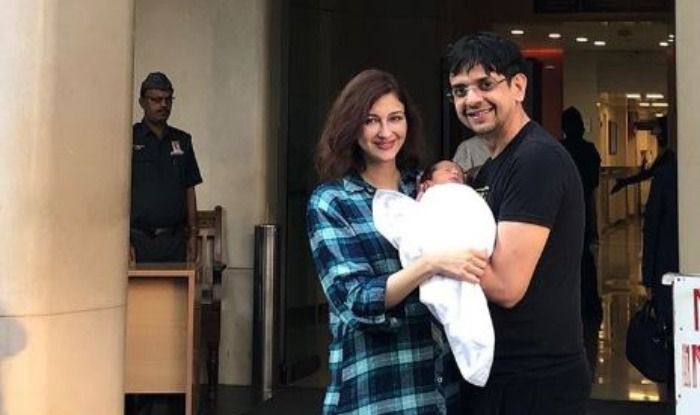 Saumya had earlier held a baby naming contest on social media where many users came forward and suggested names for her son. Talking about the same, she told HT,  “Honestly, I didn’t think of having a contest on social media but it so happened that when my son was born, my husband and I were not prepared for the delivery. After a check-up, the doctor said that I had to be admitted immediately. Later, when I shared the news about the birth of my baby, everyone was asking about the name. And my reply was, ‘why don’t you suggest a name?’”. Also Read - Kareena Kapoor Khan, Son Taimur Ali Khan Try Their Hands on Pottery as They Vacay in Dharamshala | See Pics

The actress announced her pregnancy in the cutest way possible. She shared pictures flaunting her baby bump and wrote, “Woke up feeling like a magician, feel like a superhero without a cape most days now, filled with blessing and godliness. Constantly excited by the buzzing in my head and the sudden pump of hormones. This promises to be a fascinating ride. The big news — I’m pregnant and trying to soak in every moment of it! Need your best wishes throughout.”

Woke up feeling like a magician today, feel like a superhero without a cape most days now, filled with blessing and godliness. Constantly excited by the buzzing in my head and the sudden pump of hormones; this promises to be a fascinating ride. The big news-I'm PREGNANT and trying to soak in every moment of it! Need your best wishes throughout. Thanks @sachin113photographer for capturing my happy moments. You are too sweet. @shraddha.naik thanks for making me always look beautiful and add beauty in my life with ur friendship.

Saumya is one of the popular actors of the small screen. She first started off in 2015 and then went on to feature in many popular daily soaps. However, she became a household name after playing the role of Anita Bhabhi in Bhabiji Ghar Par Hain. The actor also featured in Kareena Kapoor Khan and Shahid Kapoor starrer Jab We Met. She played the role of Roop, Bebo’s younger sister.

The actor tied the knot to a banker Saurabh Devendra Singh in December 2016.