Bharat Ratna Awardee Bhupen Hazarika: Here is All You Need to Know About The Music Maestro

From early life to bagging awards, here's all you need to know about Bharat Ratna Awardee Bhupen Hazarika

Prime Minister Narendra Modi shared a heartfelt message for Hazarika and tweeted, “The songs and music of Shri Bhupen Hazarika are admired by people across generations. From them radiates the message of justice, harmony and brotherhood. He popularised India’s musical traditions globally. Happy that the Bharat Ratna has been conferred on Bhupen Da.” In May 2017, PM Modi named the longest bridge after Bhupen Hazarika. Also Read - CISF Issues Clarification Over Cooch Behar Firing, Says Mob of 150 Attacked Troops, Action In Self Defence

The songs and music of Shri Bhupen Hazarika are admired by people across generations. From them radiates the message of justice, harmony and brotherhood. Also Read - 'Glad They Are Taking My Clubhouse Chat Seriously', Prashant Kishor Reacts to Audio Clip Released by BJP

Happy that the Bharat Ratna has been conferred on Bhupen Da.

Born in 1926 in Sadiya, Assam, Hazarika completed his basic education in Guwahati, Assam in 1942. He then went to Banaras Hindu University to complete his bachelors in 1944 and continued with his masters in Political Science. Post that he went to Columbia University where he completed his PhD in Mass Communication.

During his stay in the US, he met African-American singer Paul Robeson known for his song ‘Ol Man River’ which inspired Hazarika to compose one of his famous songs ‘O Ganga Behti Ho Kyun.’ He showed the rich folk heritage of Assam to the world through his unique compositions. His other famous numbers are ‘Aami Ek Jajabar,’ ‘Dil Hom Hom Kore,’ Manuhe Manuhor,’ ‘Snehe Aamar Xoto Shrabonor,’ among others. Hazarika was also one of the leading author-poets of Assam with more than 1,000 lyrics. Apart from writing lyrics, he also wrote short stories essays, travelogues, poems and children’s rhymes. 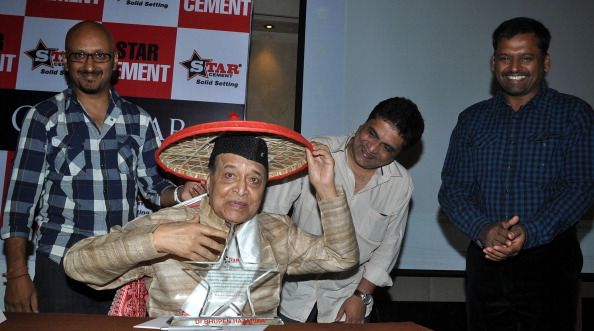 He travelled to Mumbai to work in the Indian People’s Theatre Movement (IPTA) with Salil Chowdhury, Balraj Sahni and other Marxist intellectuals and fell in love with the city and made that his second home.

A music composer, singer, actor, poet, journalist, author, filmmaker and the self-proclaimed jajabor (wanderer) sang his first song ‘Biswa nijoy nojowan’ at the age of 12 in the second Assamese film Indramalati in 1939. He wrote and sang not just in Assamese but also contributed his voice to Bengali and Hindi films from 1930s to the 1990s.

Hazarika died on November 5, 2011 of multi-organ failure. Before his cremation, his body lay in state at Judges Field for his fans and followers to bid him farewell. He was cremated on November 9 and an estimated half a million people attended it.