After watching Bhoot: The Haunted Ship, many actors took to social media to laud Kaushal’s performance. In fact, Vicky Kaushal’s rumoured girlfriend Katrina Kaif also took to the Instagram story to praise Bhoot. She wrote ‘outstanding’ and ‘must-watch’ on the poster of the film. Bhoot is produced by Karan Johar and Katrina also appreciated the producer-director for the film. Also Read - Vicky Kaushal Contracts COVID-19 And in Home Isolation, Check Official Statement 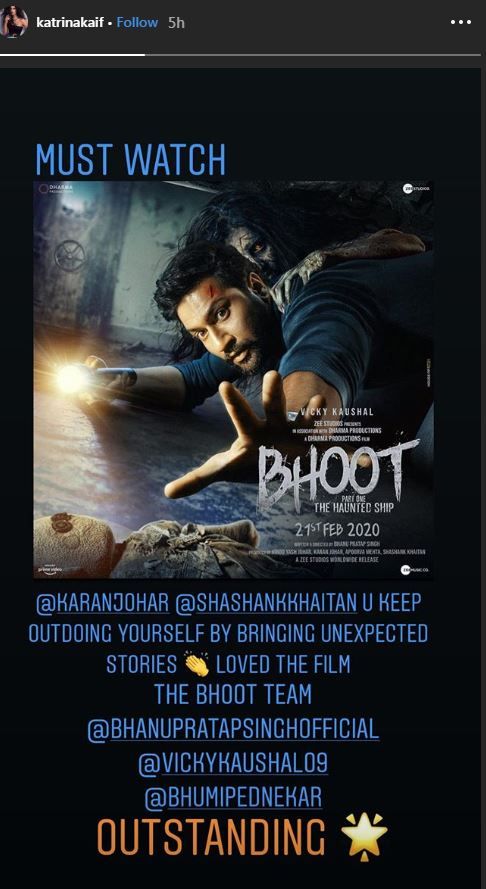 Actor Bhumi Pednekar, who will be seen playing a cameo opposite to Vicky Kaushal in the movie, took it to Twitter on Thursday to express how horror-struck she was while watching the flick. “I screamed so hard while watching #Bhoot that I had a muscle spasm. @Bps_91you didn’t give us a minute to breathe. You’ve made a genre-breaking horror film and everything about it is excellent,” the actor tweeted.

I screamed so hard while watching #Bhoot that I had a muscle spasm. @Bps_91 you didn’t give us a minute to breathe. You’ve made a genre-breaking horror film and everything about it is excellent. pic.twitter.com/rSIrONLBi3

Bhumi further congratulated the ace filmmaker Karan Johar for making such a ‘powerful and path-breaking film’. “@karanjohar@apoorvamehta18@DharmaMoviescongratulations on making such a powerful and path-breaking film #Bhoot – it truly scares the daylights out of you”. She also made it a point to appreciate the performance of her co-star Vicky and wrote: “I’ve never seen something come alive like this from paper to screen. Am so proud of you @vickykaushal09 aka Prithvi. The fear, the pain, the loss, the courage and vulnerability that you portray on screen is beautiful. We were so invested in you”.

Huma Qureshi too extended her favourable reaction to the movie and tweeted: ” This is the best Indian horror film I’ve seen !! #BhootTheHauntedShip is scary and cool all rolled into one !! @Bps_91what a debut sir !! And @vickykaushal09 is unbelievably good (as usual).. the whole team and my girl @bhumipednekarare on fire @ShashankKhaitan@karanjohar.”

Nushrat Bharucha was the other one to join the clad to congratulate the whole team of the to Bhoot: The Haunted Ship. “@DharmaMovies a brave move turning DARK! Hope you turn into other colours too & set the bar this high for their genres! @vickykaushal09You’re simply fantastic! @Bps_91a very well shot movie, amazingly made! Staying true to the horror genre, it really scared the shit out of me!” the tweet read.

Bhoot Part One The Haunted Ship is going to hit theatres on February 21, 2020, will clash with Ayushmann Khurrana-starrer Shubh Mangal Zyada Saavdhaan.