Deepak Thakur made a TikTok video which made Jasleen Matharu angry. Watch here.

Last year in Bigg Boss season 12, there were fights and arguments between contestants Jasleen Matharu and Deepak Thakur. But, who knew that they have taken their quarrel outside the house. A video posted by Deepak Thakur is doing rounds on social media and now has involved the police. The TikTok video enraged Jasleen Matharu so much that she has reportedly filed a police complaint against Deepak. Also Read - Anup Jalota Now Speaks on Sushant Singh Rajput Death Case, Says 'It's Not a National Security Issue'

In the video, Deepak can be seen asking a kid that what he would do inside the Bigg Boss house. The kid says that he would like to have some fun and go to the swimming pool with Jasleen Matharu. After watching this, Jasleen was bombarded with several comments and the same made her super upset. Also Read - Anup Jalota Comments on Jasleen Matharu's 'Glamorous Dressing', Says he Wouldn't Have Married Her Even at 35

Got an Update Jasleen Filing a police Complaint Against Deepak Thakur

To this, Jasleen shared a picture: 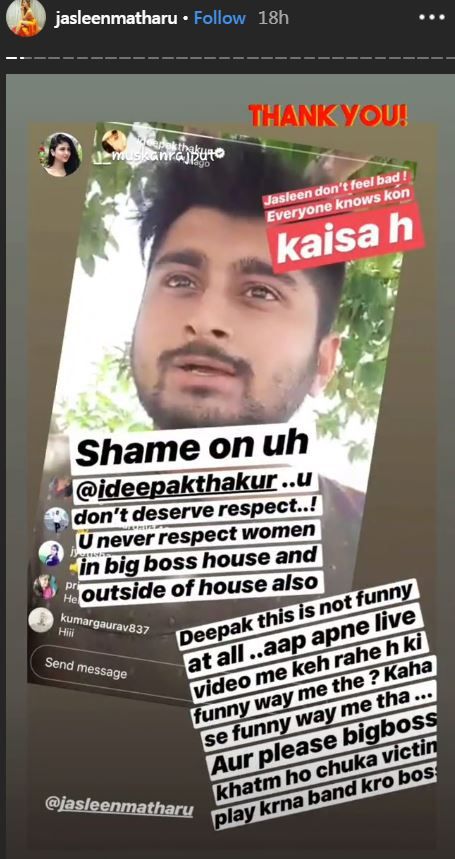 In Bigg Boss 12 house, Jasleen was one of the most talked participants as she declared that Anup Jalota was her boyfriend. They both made an entry on the show and acted as a couple in front of host Salman Khan. Later, when the contestants quizzed them about their relationship inside the big house, none of them could give a convincing answer. As the show progressed, Anup got eliminated and in his interviews with the media outside, he made sure he wasn’t painted as the man who’s madly in love with Jasleen. He maintained that whatever happened on the show wasn’t real but a trick to gain attention from the audience.