Bigg Boss 8: Did Pritam dig up Dimpy Ganguly’s violent past with Rahul Mahajan in front of Salman Khan?

On his threat over hitting Dimpy, Pritam justified that she could connect with the word ‘hitting’ because of some incident that took place in the past. 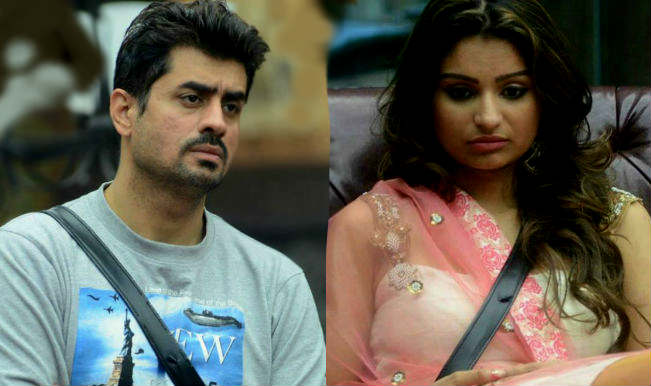 Bigg Boss house is a place where nothing remains hidden for the contestants keep digging each other’s past. In the last episode of Bigg Boss 8 Weekend Ka Vaar with Salman Khan, Dimpy Mahajan, one of the housemates faced such a situation. In the past week, Dimpy was involved in an ugly fight with another housemate Pritam during the immunity task. But little did the 29-year-old model-actress realize that the fight would remind of her haunted, violent past! Also Read - Salman Khan's Lawyer Denies Actor Having Stake in KWAN Management Agency, Calls Media Reports 'False'

Bigg Boss 8 host Salman Khan, who was not in form during the first day of Weekend Ka Vaar resumed his duties completely on the second day. He questioned the housemates about their conduct in the last seven day and brought up the terrible fight between Dimpy and Pritam during the ‘hijack’ task. On this Dimpy Mahajan cleared her stand by stating that she just did the task faithfully. Also Read - Bigg Boss 14 New Promos: Sidharth Shukla, Hina Khan And Gauahar Khan Say #AbScenePaltega

Dimpy added that her only intention of poking Pritam was to irritate him and not let him finish the task to which Pritam over-reacted. The only thing she felt bad about Pritam reaction was that the radio-jockey threatened her of hitting badly that ‘she will land at other place’. Pritam on this gave his version of clarification saying he stopped Dimpy 7-8 times before saying that. On his threat over hitting Dimpy, Pritam justified that she could connect with the word ‘hitting’ because of some incident that took place in the past. Dimpy looked shocked and justified that anyone would react to being subjected to violence in the same manner.

Did Pritam subtly pointed about Dimpy’s violent episode with her husband Rahul Mahajan? It definitely sounded like he highlighted about Dimpy Mahajan’s days of domestic violence something which has been the cause of Dimpy’s separation with Rahul Mahajan. She moved out of Rahul’s house in 2010 and in 2014 the couple had filed for divorce with mutual consent.