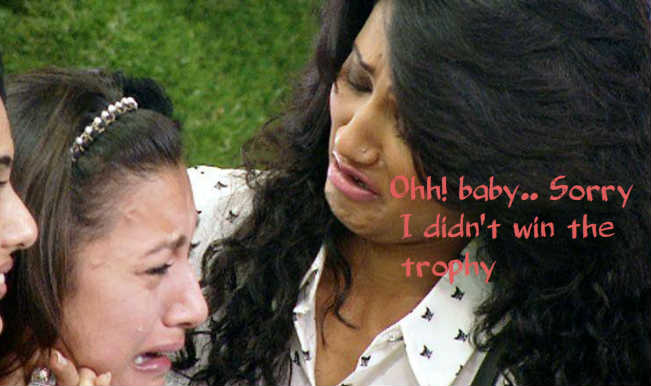 Bigg Boss 8 wild card entrant Nigaar Khan will exit the show on Sunday, this week. Sister of Bigg Boss 7’s winner Guahar Khan, Nigaar did make a starry entry into the house two weeks back. Unfortunately, she couldn’t make it to the finals due to her weak entertaining skills or say her nakras didn’t convince the audience to vote for her. Also Read - Everyone's a great actor at poker table: Minissha Lamba

The Tv actress, popular for doing negative roles in the movies, couldn’t build a good rapport with the Bigg Boss inmates, unlike other new contestants. Besides, she also carried a posh-posh attitude inside the house, which got her side lined by the housemates. Looks like, little sister’s tips didn’t work well in Nigaar’s favor this season. (Read Bigg Boss 8: Nigaar Khan to enter Bigg Boss house as fourth wild card entrant!) Also Read - Shooting Sanjay Dutt's biopic was fun, says Karishma Tanna

Dimpy Mahajan and Renee Dhyaani who entered the house at the same time, have started playing their own games since their entry. The host Salman Khan had also slammed Dimpy for creating problem between P3G. Renee on the other side is playing her own game and is mixing up with both the groups in Bigg Boss 8.

Hence Nigaar who had planned to be her true self, was seen cribbing most of the times. The Tele-star at one occasion had also objected Gautam to roam around shirtless in the house. The dusky lady did her best to stir a controversy but all her attempts fell flat.

Good luck Nigaar, we did suggest you do what you can do best (act in Tv soaps)!