Puneet Issar and Karishma Tanna has been two of the contestants who have not been able to stand each other right from the very beginning of Bigg Boss 8 season. 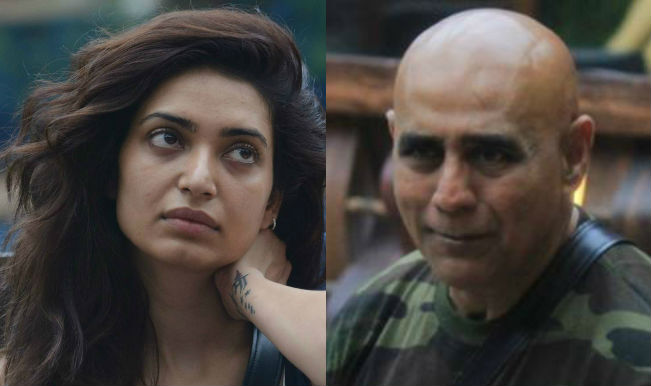 Bigg Boss 8 controversies refuse to die down. If it was contestant Diandra Soares pregnancy rumours that kept the tongues wagging, the beginning of new week witnesses the episode of blinded love and support coming from contestant Puneet Issar’s family that is now garnering headlines. This not-in-good taste and nasty thing was done by Bigg Boss 8 contestant Puneet Issar’s daughter Nivriti Issar, who took to  Twitter to vent out her anger towards her father’s biggest rival in the Bigg Boss house, Karishma Tanna. But the comment made was so unbelievably crude that she is now facing the irk of the Twitterati nationwide. Also Read: Karishma Tanna finds support from Twitterati after Puneet Issar’s daughter make outrageous comment! Also Read - Salman Khan Talks About Relationship That Has Lasted This Long: It Has Brought Certain Permanence in My Life

You can only think about what mentality did Nivriti Issar, Puneet Issar’s daughter is born with while making a hatred comment such as this. She wrote, “@BiggBoss @karishma_tanna did her father die a natural death? Or did he kill himself for having a daughter like her who has no sense?”! This is insane as she questions about Karishma’s sensibility for she is the only who had made the most insensitive comment attacking someone’s personal life. Also Read - Raqesh Bapat Breaks Silence on His Feelings For Shamita Shetty: She is Special 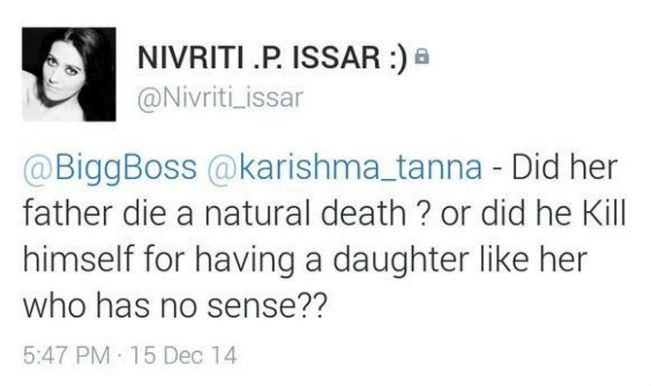 The ongoing season of controversial reality show Bigg Boss 8 seems to be hitting new lows with each passing day. The camera-sealed house known for its own share of fights, drama and controversies is not one of the best places to make friends while enemies are abundantly found. Puneet Issar and Karishma Tanna has been two of the contestants who have not been able to stand each other right from the very beginning.