Arpita Khan’s wedding to Aayush Sharma has been the talk of town for quite some time now and now, Arpita Khan has taken her husband’s name as well to become Mrs. Arpita Khan Sharma. Salman Kha 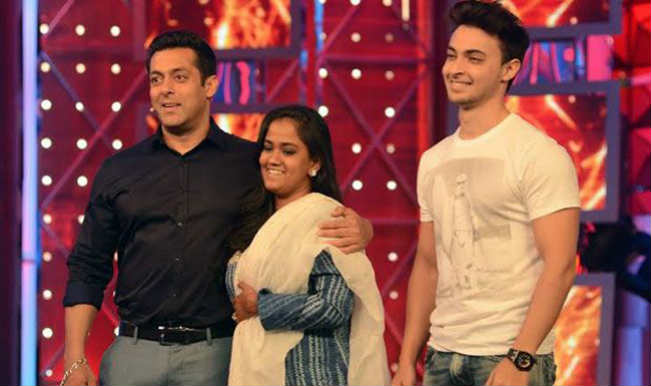 Arpita Khan’s wedding to Aayush Sharma has been the talk of town for quite some time now and now, Arpita Khan has taken her husband’s name as well to become Mrs. Arpita Khan Sharma. Salman Khan is well known for his love of gifting joy and he continued the same in grand style by gifting her newly wed sister a fancy house and one of the most luxurious cars money can buy, a pearl white Rolls Royce Phantom. Also Read - Bigg Boss October 20 Episode Major Highlights: Hina, Gauahar Get Into Heated Argument With Sidharth, Rubina Wants To Quit

Arpita and Aayush have had a grand step into matrimonial life and this time they surprise big brother Salman Khan by joining him on stage for Bigg Boss 8’s Weekend Ka Vaar episode. It may not be a surprise especially after news that Salman Khan invited the newlywed couple but we will play along for the sake of the amusement of the masses who may not know this. Also Read - Bigg Boss 14 Somvaar Ka Vaar October 19 Major Highlights: Sidharth Shukla Gets Into Heated Argument With Hina Khan, Gauahar Khan

Arpita and Aayush will meet the remaining members of the Bigg Boss 8 house as they take time to congratulate them on their nuptials. It seems like the news of Kim Kardashian appearing on the show and the news of it not happening is being tried to be mended by the producers of the show and make hay while the sun shines while Arpita Khan Sharma and Aayush Sharma are still in the limelight, if not on the top trending lists anymore. Catch the Bigg Boss Weekend Ka Vaar episode and our analysis of the mad house here.