Marriage is on the cards soon!

Here’s a good news for all Bigg Boss 9 winner  Prince Narula and girlfriend Yuvika Choudhary‘s fans as the marriage is surely on cards. Earlier this month we had reported that Prince and Yuvika, who met each other in the Bigg Boss house, have secretly got engaged. The recent video that had been doing the round on social media, where actress Kishwer Merchant, a close friend of the couple, was seen asking them ‘what happened on Valentine’s Day’ and was further heard asking Yuvika to show their finger, while the couple was seen blushing in the video, proves the duo has exchanged rings, making their relationship official. Also Read - Hat Ja Tau Singer Vikas Kumar Slaps A Legal Notice To Makers Of Veere Ki Wedding

However, now it’s confirmed as the couple has finally announced the news of their engagement on social media. While Yuvika took to her Instagram handle to share a picture and announce her engagement with her longtime beau Prince, Prince, who has changed his name to Prince Yuvika Narula on Instagram, too took to his social media handle to make the announcement. Also Read - Prince Narula-Yuvika Choudhary Get Engaged, Shikha Singh Files Case Against A Cop, Shaheer Sheikh To Return With New Show - Television Week In Review

Even Yuvika, who is unable to believe that they are engaged as it all feels like a dream, too captioned her post as, “Can’t believe this just happened love u beba #forlife❤ thank u for asking me .. for holding my hand.. for believing in us.. for being my partner for forever n beyond…. cheers to US 💑…. to new beginnings.. n to a lifetime of love n memories..Forever yours.. always 💍♥️ #engaged @princenarula.”

Bigg Boss 11 second runner-up and TV Producer Vikas Gupta also took to his microblogging site to congratulate the couple and wrote, “Congratulations @princenarula88 @yuvikachoudhary . Bhai … & Bhaaabhiii . Wish you both tons of happiness and love . #DilKhushNews.” Actress Neha Dhupia, too commented on Prince’s post, which read, “Congrats @princenarula and @yuvikavhaudhary this is the best news ever.” ALSO READ: Did Prince Narula And Yuvika Choudhary Get Secretly Engaged On Valentine’s Day Last Year? – Watch Video

Can’t believe this just happened love u beba #forlife❤ thank u for asking me .. for holding my hand.. for believing in us.. for being my partner for forever n beyond…. cheers to US 💑…. to new beginnings.. n to a lifetime of love n memories.. Forever yours.. always 💍♥️ #engaged @princenarula 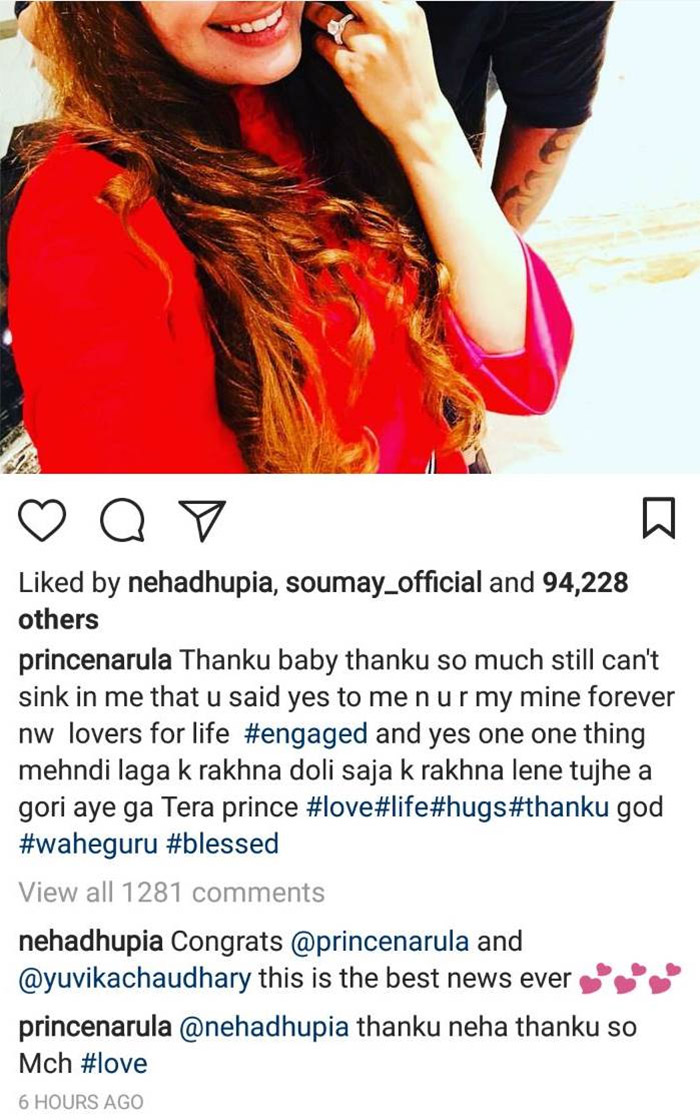 The MTV actor, who also appeared in MTV shows Roadies and Splitsvilla, garnered huge popularity through all his reality shows. Prince and Yuvika had been dating ever since Bigg Boss 9 but the duo kept their affair quite secret. Well, their social media accounts couldn’t keep that a secret but revealed their relationship very well, as Prince and Yuvika were spotted together during various events and take vacations. I am sure fans can’t keep calm after learning this piece of information. We too wish the engaged couple many many congratulations. Watch this space for further updates.