Last night, Bigg Boss Marathi fans were awaiting to see who gets eliminated out of the ones nominated. For the uninitiated, last week, Resham Tipnis, Rajesh Shringarpure, Jui Gadkari, Bhushan Kadu, Sushant Shelar had been nominated for elimination. However, last night’s episode ended with Rajesh and Resham being in danger, piquing the curiosity levels of each of the remaining contestants and the audiences further. Well, today’s episode is going to be an explosive one as one out of the two will have to exit the show. And if rumours are to be believed, Rajesh Shringarpure will be eliminated tonight. Also Read - Bigg Boss 14 Finale Week: Rubina Dilaik Talks About Divorce, Abhinav Shukla Cries Hard

There’s a pic going viral since morning that suggests that Rajesh will be the next contestant to leave the show. In the pic, Smita Gondkar is seen giving a head massage to Asaad Kale. However, that’s not what has grabbed our attention. It is the board in the background carrying the names of the remaining housemates that has grabbed our eyeballs. With every passing week, the number of housemates in the house is reducing and the board bears testimony to that fact. With Rajesh’s name missing from it, fans are expecting Rajesh to be the latest contestant to walk out of the Bigg Boss Marathi house. Take a look at the picture going viral: Also Read - Pavitra Punia Gets Evicted From Bigg Boss 14 After Jaan Kumar Sanu? 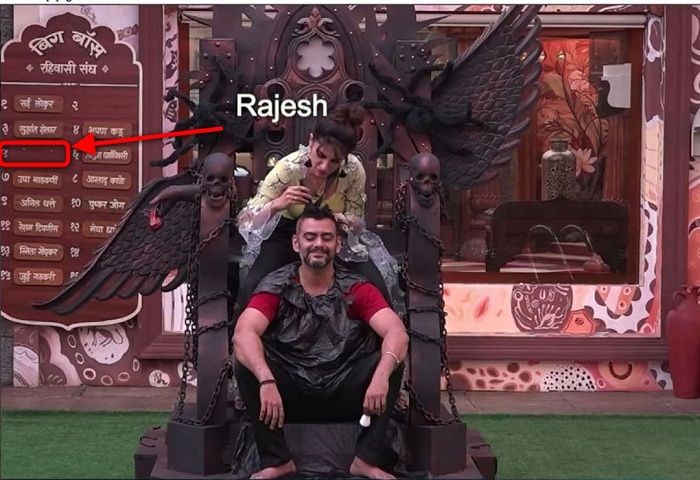 Rajesh and Resham were growing quite fond of each other inside the Bigg Boss house. With the growing romance between them, fans had expected that the two would last till the end. The love angle is not a new strategy applied by contestants inside the house to gain popularity. And more often than not, it helps contestants to last till the very end of the game. However, looks like the Marathi audience didn’t quite like it. Whether or no Resham and Rajesh truly like each other, will be known in the days to come. Stay tuned to this space to watch all the Bigg Boss updates of tonight’s episode. Will Rajesh truly exit the house, will be revealed in tonight’s episode. Leave your views in the comments’ section below.